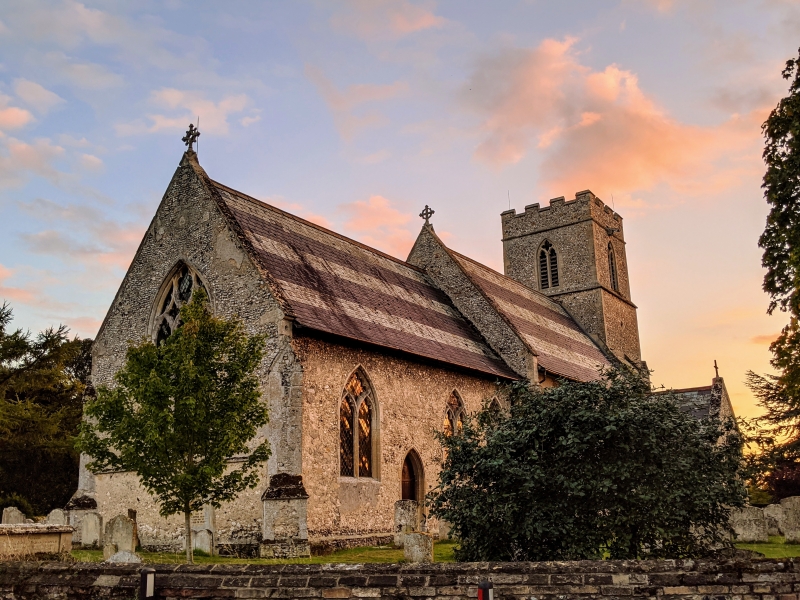 II*
Church. Medieval, restored 1874. Nave, chance, south chapel, south aisle,
west tower, north porch. Flint rubble with areas of early rendering intact.
Freestone dressings. Slated roof with parapet gables. Tower roof flat behind
crenellated parapets. Originally a 2-cell church of nave and chancel; these
became the south aisle and chapel respectively in early C14, and of this date
are present nave, chancel, tower and porch. Mid or late C13 features include:
lancets in south chapel wall, large 2-light east chapel window, 2- and 3-
light south windows with intersecting tracery, moulded south doorway (beside
it is a sepulchral recess containing a coffin slab with floriated cross).
Beneath the kneeler of the west parapet gable is a carved mask. The early C14
work is rich in detail: - 2-stage tower with massive buttressing, 2-light
belfry openings and mask - carved gargoyles; the slit-windows to the ringing
chamber and stair turret are all moulded. West doorway, with, above it, a
small 2-light window and above that an image niche. Lighting the Lady Altar
in the south aisle is a low square window with tracery, and in its cill is a
piscina and sedile; nearby is an aumbry. The nave and chancel have 2-light
north windows without hoodmoulds. Parapet-gabled porch with 2-light side
windows and hoodmoulded doorway. North chancel and nave doorways similar; the
latter has a C15 image niche above. Tower doorway has a pair of oak-boarded
mediaeval doors, and above it is a sanctus bell window. Nave arcade has
octagonal columns with heavy moulded capitals and bases; the arches to chancel
and south chapel similar. In the chancel a piscina with aumbry and dropped-
cill triple sedilia. The chapel of St. John has a similar piscina and sedilia
and beside the east window is a niche. In the north east corner of the
chancel is a niche, formerly canopied, of uncertain purpose. It incorporates
a pair of aumbry-like cupboards, perhaps intruded later, with shelf above.
Early C14 rood screen has 4 lights on either side with balusters and traceried
heads; the doorway has drop-tracery. The lower half was restored 1874.
Octagonal limestone font, c.1300; the bowl carved with sunk quatrefoils, the
stem with attached shafts having moulded capitals and bases. In the aisle is
a set of 7 C15 pews, most having poppyheads, some with carved figures; all are
mutilated. 6 similar pews in the nave have better-preserved figures. In the
chancel floor is a marble slab to Martha Turk (spinster), of 1791; another to
Samuel Fisher, d.1713. There are fragments of medieval glass in the north
chancel windows. Roofs were all renewed in restoration of 1874, the nave has
a crown-post roof, chancel a wagon roof and aisle a coupled-rafter roof. For
detailed description, see "Suffolk Churches", H. Munroe Cantley.