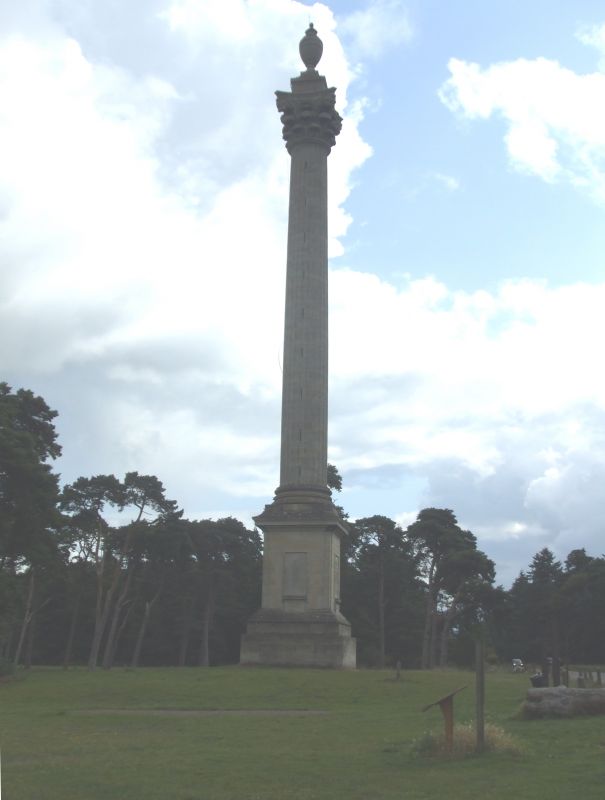 Monument by Clyde Francis Young, unveiled 1921. A war memorial to the First World War dead of the three parishes of Eriswell, Icklingham and Elveden: a Corinthian column, over 30 metres high and surmounted by an urn. Second World War additions.

The memorial stands on the north side of the A11 trunk road, Weather Heath, Suffolk, at the point where the parishes of Elveden, Icklingham, and Eriswell meet. It consists of a c 39m Corinthian column comprised of a base, pedestal, shaft and capital in Weldon stone with a Portland stone funerary urn at the top. The urn is a copy of a smaller Coade stone urn of 1791 from Mount Edgcumbe, Plymouth, with fluting up to its widest point where there is a band of Vitruvian scroll.

The pedestal, rectangular on plan c 7m x c 5m, has an inset door with simple projecting, low-pedimented architrave approached by a stepped entrance on the north side. The door leads to a newel staircase of 148 steps, rising the full height of the monument. The other three sides of the pedestal bear the name panels for the fallen from each of the three parishes (facing their own parish), carved in relief. There are 48 First World War names and six Second World War names.

This List entry has been amended to add the source for War Memorials Online. This source was not used in the compilation of this List entry but is added here as a guide for further reading, 13 January 2017.

The asset was previously listed twice also under the parish of Eriswell at List entry 1286031. This entry was removed from the List on 6 February 2017.

The aftermath of the First World War saw the biggest single wave of public commemoration ever with tens of thousands of memorials erected across England. This was the result of both the huge impact on communities of the loss of three quarters of a million British lives, and also the official policy of not repatriating the dead: therefore the memorials provided the main focus of the grief felt at this great loss. One such memorial was raised on the Elveden estate as a permanent testament to the sacrifice made by the members of three adjacent parishes who lost their lives in the First World War.

The Elveden estate upon which the war memorial stands had belonged to Maharajah Duleep Singh (last Maharajah of the Sikh Empire), until sold by his executors in 1894 to noted philanthropist and businessman Edward Cecil Guinness (created Earl of Iveagh and Viscount of Elveden in 1919). Guinness resided at Elveden Hall (Grade II*), employing the architect William Young to extend the hall and add an east wing in the Classical style c1899-1903.

Guinness commissioned the war memorial from William Young’s son, Clyde, and funded it in conjunction with donations from parishioners. Clyde Young, who had worked with his father to design the Old War Office, Whitehall (Grade II*), continued his father’s work at Elveden Hall. It was probably Guinness who requested that the memorial take the form of a column on a monumental scale, and may have been influenced by his Classical work at Elveden Hall, his non-sectarian preferences, and his association with Freemasonry.

The appeal of the column as a landscape feature on his estate may have been inspired by his awareness of the monument to Coke of Norfolk at nearby Holkham Hall: it is known that Guinness requested that the column be taller than the 38m Leicester Monument (Grade I) on that estate, but shorter than the 44m tall Nelson’s Column (Grade I) in Trafalgar Square, London. Elveden War Memorial stands at c39m.

The memorial is located where the parishes of Elveden, Icklingham, and Eriswell meet: it was the 48 fallen from these three parishes of the estate that the memorial was intended to commemorate. It took two years to build and was erected by John Thompson and Sons of Peterborough. It was unveiled on 21 November 1921 by Field Marshal Sir Henry Wilson GCB DSO, and dedicated by the Bishop of St Edmundsbury and Ipswich. The unveiling ceremony was also attended by Prince Frederick Duleep Singh, younger son of Duleep Singh, the former owner of the Elveden Estate. Accounts of the unveiling service commented on what a spectacular new regional landmark had been created, one that was representative of the ‘titanic’ scale of the war.

Clyde Francis Young FRIBA (1871-1948) was the son of architect William Young. He took classes in South Kensington in 1889 and, during the time he was articled to his father (1890-1894), at University College, London. He then studied in Europe before being made a partner by his father in 1898. His varied work includes country houses, municipal and education buildings, and work at the Inner Temple, London.

Elveden War Memorial, situated at the north side of A11 trunk road, Weather Heath, Suffolk, is listed at Grade II* for the following principal reasons:
* Historic interest: as an eloquent witness to the tragic impact of world events on this community, and the sacrifices it has made in the conflicts of the C20;
* Architectural interest: designed by architect Clyde Young, it is a unique example of the Corinthian column being used on this scale as a First World War memorial;
* Sculptural interest: well executed work in Weldon stone and including a Portland stone urn atop the monument that was modelled on a Coade stone example of 1791 from Mount Edgcumbe, Plymouth;
* Design: an ambitious, monumental Corinthian column unlike any other First World War memorial in England, with added interest by its placing at the boundaries of the three Parishes whose fallen it commemorates (on the Elveden Estate).