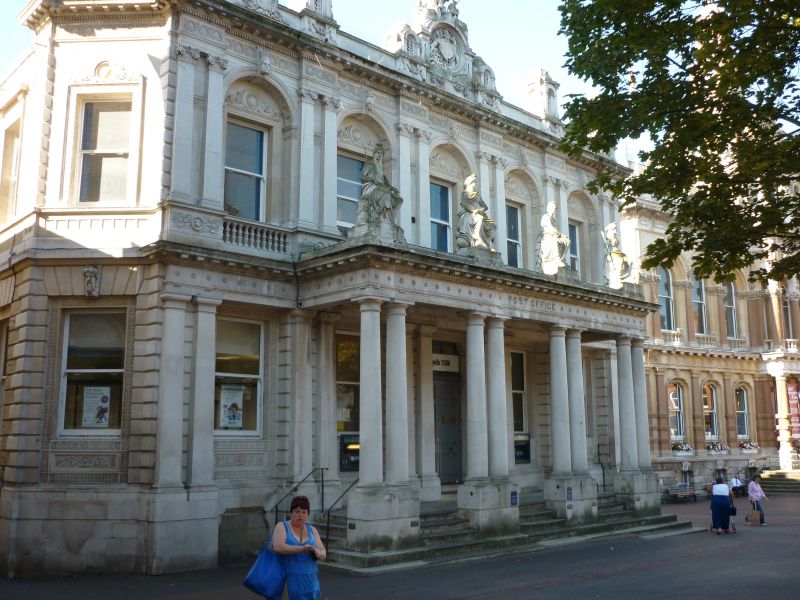 2.
A late C19 stone fronted building with grey gault brick at the rear.
built in an Italianate palazzo style, with splayed corners and a parapet
with a modillion cornice. A central feature rises above the parapet with
a Royal coat of arms and female figures. The end bays of the facade are
marked by pairs of arched pavilions rising above an ornamental parapet.
2 storeys and a lower ground storey on Princes street which forms an ashlar
base to the building. 5 window range on the front, one window range on
each splayed corner and 8 window range on Princess Street, double-hung
sashes without glazing bars. The 1st storey windows are set in semi-circular
recessed arches with keystones with human heads, between paired Ionic
pilasters. On the ground storey a Roman Doric portico projects on the
front with paired columns on pedestals, a modillion cornice and a low
parapet with female standing figures representing Industry, Electricity,
Steam and Commerce. It is approached by a flight of stone steps. The
1st storey windows on Princes Street have architraves and cornices and
a pediment rises above the end 3 windows on the south end. The ground
storey windows are set between rusticated pilasters and have enriched
architraves and aprons and keystones with human heads. At the south end
there are paired pedimented doorways.