Church of St Mary at the Elms 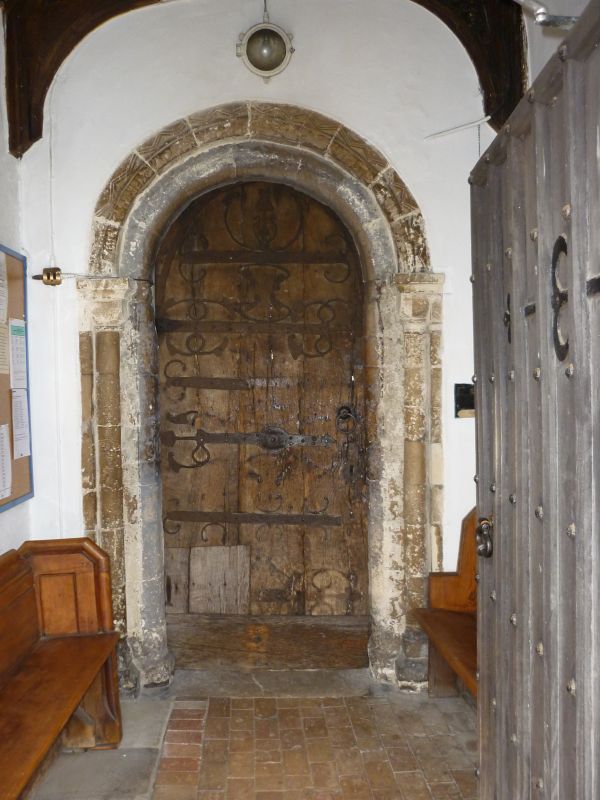 Entry Name: Church of St Mary at the Elms

Church of England Parish: Ipswich St Mary at the Elms

EXTERIOR
The brick W tower is C16, and has polygonal buttresses, a stepped, embattled parapet, and a polygonal NE stair turret. The bell openings, also in brick, have pairs of two light openings under a broad, depressed head with a thick mullion between the pairs of lights. The three-light W window has vertical tracery, and the nave and chancel windows are largely C19 and Perpendicular in style, those in the medieval fabric replacing probably C16 windows with depressed heads and Y-tracery. The N side is in several phases. The western two bays, of brick, are late C15 or early C16; the third bay, which has a cross gable, is the remains of the N transept, and the eastern two bays were added in 1883 as part of the eastwards extension of the church that also included the chancel. The low N vestries are late C19 or early C20. The chancel E window is blocked. The S side of the nave has a red brick parapet, and the remains of the former S transept are marked externally as buttresses. The former chancel, now the E end of the nave, has C19 Perpendicular-style windows of different sizes, apparently replacing two small Tudor windows. The C19 organ chamber is tall and has a cross gable. The S porch has three badly damaged niches over the entryway; new sculpture was installed in them in 2006. The S doorway is early C12, and has two orders, the inner with a roll moulding, the outer with chevron on nook shafts with cushion capitals. The S door has elaborate scrolled ironwork that is probably also early C12.

INTERIOR
The interior is largely plastered and painted, except for the C19 parts of the N arcade and the chancel arch. Very tall, C16 tower arch, rising the whole height of the nave, with a depressed head and multiple mouldings dying into the sides. The division between the nave and the former chancel, now incorporated into the nave, is marked by a change in alignment of the wall and a change in the wall plate for the ceiling. The N arcade is of five bays. The western two are late C15 or early C16 and have a continuous outer order and an inner order on polygonal shafts with moulded capitals and high bases. The third bay, separated by a long pier, is contemporary and is the remains of the arch into the N transept. On its east side, the mouldings die into a C19 pier with clustered shafts, inserted as part of the 1883 extension. The eastern bays have similar clustered shafts, and the chancel arch is ornamented with paterae and shields set into a hollow moulding. The blocked chancel E window has a large crucifix hanging against it which dominates the interior view from the west. In the former chancel S wall (now the nave S wall), a niche formed from the former priest's door holds a copy of a late medieval English devotional image arranged as a shrine. Low-pitched, late C15 or early C16 roofs to the N aisle and transept, with moulded wall plates and beams. The nave (including the former chancel) has a C18 plaster ceiling, probably concealing a late medieval roof. The C19 chancel roof stands on carved corbels.

PRINCIPAL FIXTURES
S door and its ironwork are late C11 or early C12. Medieval stoup by the S door. Good Victorian gothic font, 1870s, by Mr Ireland of Princes Street, carved with scenes of the gospel and figures of the evangelists on the stem. Early C20 timber screen under the tower arch. Royal Arms of Charles II. Sculpted triptych of the rood, 2006, by Charles Gurrey in the niches on the S porch.

Some good C19 and C20 glass, including a N aisle window of 1907 by Ninian Comper, and nave windows of 1879-80 signed Taylor late O'Connor. Wall monuments of the C17-C19, including William Acton, d. 1616 a hanging monument with kneeling figures, over which looms a dart-wielding skelton. One hatchment.

HISTORY
The early history of the church is confusing. There was a church dedicated to St Saviour near this site in the C11. St Mary at the Elms (to distinguish it from the other St Marys in the town) was first mentioned in 1204, when both it and St Saviour's were listed among the possessions of the Augustinian priory of Holy Trinity, Ipswich. However, St Saviour's disappeared some time thereafter, probably before the end of the C13. The present church building was probably in existence by the early C12, the date of the S door, and was definitely known as St Mary at the Elms by the C14. Whether it was, in fact, St Saviour's before that is not clear. The S porch was probably added in the C14, and the transepts may have been C14 or earlier. A brick N aisle was added in the late C15 or early C16, and the present W tower was built in the early C16. The S transept was demolished at an unknown, probably post medieval, date. The S porch was repaired in 1848, and there was further restoration in 1860 by R M Phipson. In 1883 the E end of the church was demolished and greatly extended to designs by E F Bisshopp, with the area of the former chancel being taken into the nave. A new chancel with S organ chamber was built, and the N aisle extended eastwards. The N vestry and organ chamber were added a few years later. Bisshop was an Ipswich-based church architect and was also surveyor to the diocese of Norwich from 1885.

REASONS FOR DESIGNATION
The church of St Mary at the Elms, Ipswich, is designated at Grade II* for the following principal reasons:
* For its early fabric, in particular the Norman S doorway.
* For its later medieval fabric, including the C16 tower.
* For the interest of its fixtures, such as the Acton monument.