A Grade I Listed Building in Cheadle, Staffordshire 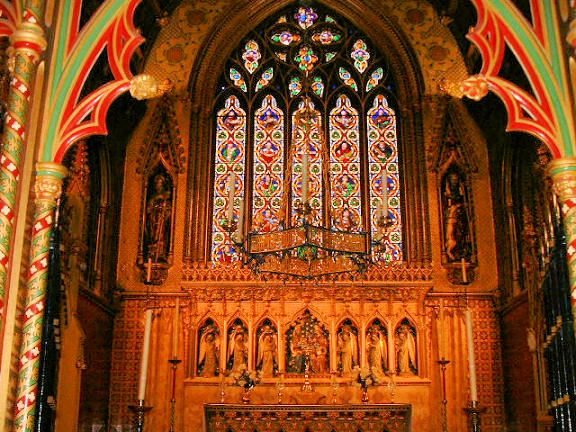 Aisles consciously divided from nave by a change in roof pitch, both on a fleuron eaves band, lower pitch to aisles and a tiny (unlit) clerestory band. Both aisles are of five bays on plinth divided by bulky two-stage buttresses gableted at the head; the south aisle has labelled, pointed three-light windows all with different (but authentically Decorated) tracery; the north aisle has similar two-light windows with a three light at the east side only. Both aisles have similar gabled, single-storey porches but the detail on the south is finer with squat two-stage diagonal buttresses, solid stone, ribbed roof, a niche in the apex bearing an effigy of the Virgin, flanked by two low relief medallions set over a deeply moulded pointed entrance reveal with two bands of ball flower and crested extrados on three clustered pinnacles; the interior has a ribbed vault; both aisles stop just short of the nave to the east, their pent roofs divided by a verge parapet revert into smaller pitched roofs clasped against chancel sides (presenting a triptych of gables to the ritual east) to the south. There is a chapel of two bays, similar but smaller in pace than the aisles with single-light windows, the east has three lights; its partner on the north the vestry breaks the line of aisle roof by an additional storey reached by an external staircase on the west of pure medieval derivation; a triple-shafted castellated chimney breaks the eaves on the north, set assymetrically over a gabled single-storey projection lit by two lancets and a trefoil in the apex; the Tudor arched vestry entrance, reached by steps, is packed into the space between stair turret and gable; the vestry composition almost aedicular, stands on its own, more domestic than ecclesiastical but of exceptional balance.

Interior: the entire interior of the church is painted from the floor up with gold, blue and red predominating in an intensely patterned scheme. Nave of five bays; octagonal columns painted in chevron pattern; pointed moulded arches, with carved lions in spandrels; large studs on corbels carry scissor-brace collared trusses, fretwork in apices, single purlins and large curved windbraces; aisles have painted plaques of Life of Christ (16 in all); purlin lean-to roofs; pointed chancel arch with Last Supper painting over; pointed covered barrel vault to chancel; reredos depicts coronation of the Virgin with six angles; sedilia and piscina with spire finials over and Easter sepulchre to north; ogee-headed opening with poppyhead finial and pinnacles at sides. Font octagonal on corbelled vase with fretwork spire cover all set in an ornate brass railed enclosure. Pulpit: large and octagonal on stand with religious scenes cut deep into panel-recesses. Screens crested arcaded screen to chancel and brass screen to tower. Glass by Wailes.