A Grade I Listed Building in Lilleshall, Telford and Wrekin 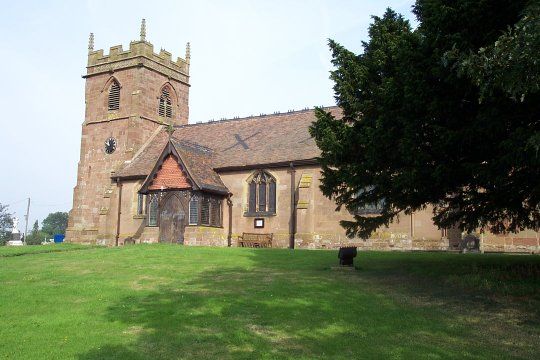 Church of England Parish: Lilleshall St Michael and All Angels

INTERIOR: Five-bay north arcade with chamfered pointed arches, short octagonal piers
with octagonal capitals and bases. Nave and chancel roof have arched braces,
collars and tie-beams with brackets underneath, and small cusped wind-braces.
Two-centred arch from chancel to north aisle. Norman cylindrical font has dreaded
sides with simple decoration and C19 base. Good monument in chancel to
Richard Leveson 1661 and his wife 1674 - 2 reclining figures with flanking columns
and pediment and putto outside. Royal Arms to Charles II. Stained glass in chancel
east window by Evans.
The gravestones have been moved and most have been set against the churchyard boundary
wall where there are a few C18 but mostly C19 headstones.