A Grade I Listed Building in Fladbury, Worcestershire 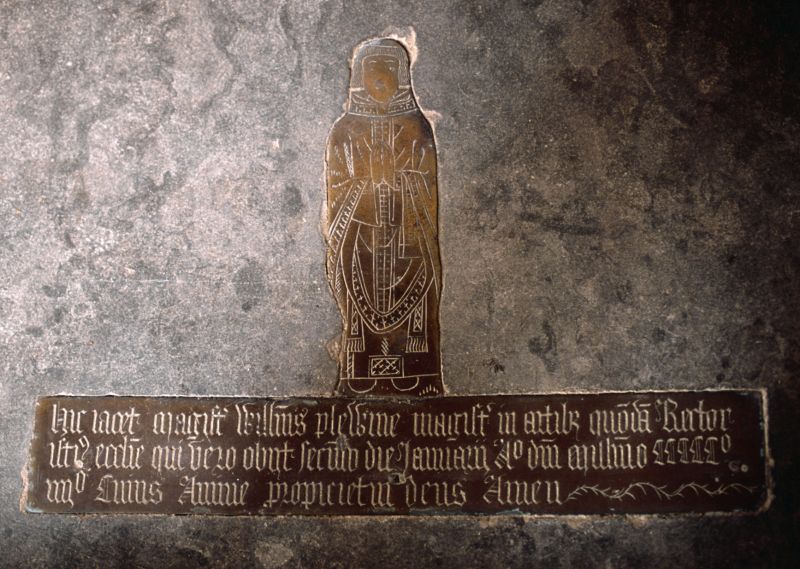 GV
I
DATES OF MAIN PHASES, NAME OF ARCHITECT: parish church with C12 tower base, C14 aisled nave, chancel and porch. Nave and tower heightened in the C18. Restored 1864 and 1871 by F. Preedy, who also made several stained-glass windows.

EXTERIOR: The four-stage tower is C12 in its lower stage. It has freestone pilaster buttresses and round-headed windows. On the east side of the tower is the round head of a former upper-stage opening beneath the creasing of an earlier steeper roof. Above the first stage the tower is otherwise of 1752, with narrow windows to second and third stages, the latter also with a clock in a stone surround in the west face, while the upper stage has two-light bell openings with Y-tracery and louvres. The parapet has Gothic panelled battlements, including pierced merlons, and pinnacles. The nave has a clerestory of four two-light straight-headed windows, above which the nave has been heightened in brick. The aisle windows are taller but otherwise are similar to the clerestory windows. The aisles have similar three-light west and east windows. The head of a C13 cross slab is attached to the south aisle wall. The front of the porch is C18 or C19 and has a double-chamfered round-headed arch, segmental parapet with iron lamp holder, surmounted by a sundial. The side walls are C14, as the interior details reveal. The chancel has a five-light Decorated east window, below a quatrefoil window in the gable. North and south sides have two-light Decorated windows. On the north side is the cusped piscina from a former sacristy, and a later lean-to vestry. On the south side is a priest's door and a lean-to organ chamber.

INTERIOR: the porch is rib-vaulted on slender shafts, and has a south doorway with continuous moulding. The nave has C14 four-bay arcades of octagonal piers and double-chamfered arches, and a canted C18 plaster ceiling, with longitudinal ribs, two roses, and cornice with triglyphs. Aisles have plain cambered plaster ceilings. In the south aisle is the blocked doorway of a former stair leading to a chamber over the porch where, beneath the ceiling, are the dressings of a former upper-chamber window. The outline of a former piscina is visible in the south aisle, with an adjacent aumbry. The tower arch, which has a continuous double chamfer, was added when the tower was heightened in the C13. Inner tower walls also have tall arches added to strengthen the walls when the tower was raised. The chancel arch is double-chamfered, of which the inner order is on corbels. Similar arches open to the organ chamber from chancel and south aisle. The chancel has a four-bay arch-braced roof, mainly C19 but on medieval brackets with shield-bearing angels. Openwork tracery is above the braces. A double piscina has cusped arches and corbelled basins, next to which is a window seat. Chancel walls are plastered but other walls have stripped to expose stonework. There are C19 tile floors, except for raised wooden floors below the pews.

PRINCIPAL FIXTURES: the tower screen was erected in 1953 using panels from the west gallery that was dismantled in 1871. It records benefactions over the period 1716-1845, and the rebuilding of the tower in 1752. The polychrome chancel reredos of c1865 was designed by Preedy and built of Cornish alabaster and tiles by Richard Boulton of Cheltenham, incorporating angels with harps, cross and inscription band.

Most of the furnishings are C19: a Perpendicular-style font of c1850, polygonal Painswick-stone pulpit of 1871, richly ornamented and with figure of John the Baptist. Benches of 1871 have moulded ends and arm rests. Choir stalls are dated 1913 and have frontals of 1914 with a foliage cornice. Beneath the tower is a chest monument and brasses to John Throckmorton (d 1445) and his wife: the tomb is decorated with quatrefoils and has brass effigies 4 feet long. In the chancel floor are small brasses of priests commemorating Thomas Mordon (d 1458) and William Plewne (d 1504). In the nave floor is brass to Edward Peytoo (d 1488).

There are numerous wall monuments, chief of which is the large Baroque standing monument to Bishop William Lloyd (d 1717) by James Withenbury: it has Corinthian pilasters and scrolled sides, entablature with achievement and is surmounted by a portrait bust. Other wall monuments of the C18 and C19 include a memorial to Elizabeth Charlett (d 1746) with portrait bust, by John Ricketts junior, and George Perrott (d 1806). Two funeral hatchments are in the north aisle, to George Perrott (d 1806) and George Wigley Perrott (d 1831).

In a chancel north window is a notable C14 heraldic glass, thought to have been brought here from Evesham Abbey, representing six shields with a seventh in the trefoil above. A fragment of C14 glass showing the Virgin and Child is placed in an oak-framed light box at the east end of the south aisle. Other glass is mainly by Frederick Preedy. It includes a good east window of the Passion and Resurrection, c1868, north aisle east window of the Ascension, c1856, and other aisle windows of the 1870s and 1880s, including Nativity and Transfiguration in the aisle west windows.

HISTORY: the lower stage of the tower is C12 but it was heightened in the C13, when the original structure was strengthened by internal arches. The church was enlarged considerably c1340, from which period are the nave, aisles and the porch, which was originally two storeys. Clerestorey windows suggest heightening of the nave in the C16. It was heightened again in the later C18, from which period the nave and aisle roofs survive, perhaps c1782 when a west gallery was installed. The tower was rebuilt and heightened in 1752 by Thomas Woodward, assisted by his nephew Richard. The chancel was restored in 1864-65 by Frederick Preedy (1820-98), architect and stained-glass artist of Worcester, whose family moved to Fladbury in 1840. Preedy also made glass for the various family memorial windows. The remainder of the church was restored by Preedy in 1871, when an organ chamber was added.

REASONS FOR DESIGNATION:
The church of St John the Baptist, Fladbury, is listed Grade I for the following principal reasons:
* For the extent and quality of its medieval fabric, including C12 tower base, C14 nave, aisles and vaulted porch.
* It has C18 work of interest, including nave ceiling and tower.
* For its fine medieval glass.
* It has fine late medieval brasses, including the impressive Throckmorton tomb.
* Other features of special interest include a large C18 memorial and good C19 glass windows by one of the foremost glaziers working in Worcestershire.