A Grade I Listed Building in Turvey, Bedford 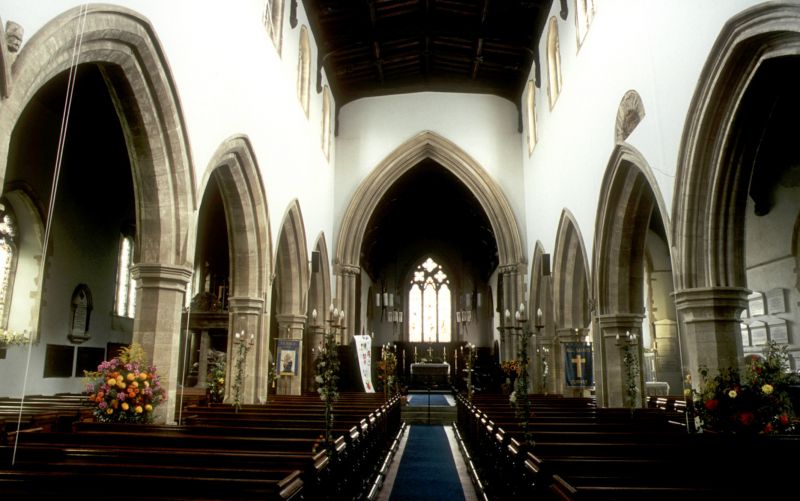 TURVEY,
HIGH STREET (north side),
Parish Church of All Saints,

Medieval parish church with additions and alterations 1852-1854 by
Sir G. G. Scott. His work has been called "the finest mid-Victorian
ecclesiastical ensemble in Bedfordshire" (McHardy). Church consists of nave,
chancel, W. tower, N. and S. aisles and S. porch. W. part of the nave has
remains of probably Saxon work as does the base of the tower. Tower arch and
central stages are Early English; the parapet and pyramid roof, Victorian.
The nave is mainly C13 with the N. arcade added early C14 and the nave
extended. Most of the windows were reworked by Scott. C15 clerestorey and
fine angel roof. S. porch is also C15. It was originally vaulted. S.
doorway has good C13 ironwork similar to that at Leighton Buzzard and Eaton
Bray. The chancel was rebuilt by Scott 1852-54. In a recess in the S. aisle
is an early C14 painting of the Crucifixion. There is an impressive
collection of monuments. Two C15 brasses in the S. chapel. In the S. aisle a
tomb-chest of Sir John Mordaunt 1506. Between chancel and S. chapel, one of
the most important Tudor monuments in the county (Pevsner), to the first Lord
Mordaunt 1560. It is by T. Kirby. Alabaster effigies and stone surround.
Coupled Roman Doric columns and an arch decorated with chains of squares and
circles. Victories in the spandrels. The upper storey has two caryatids.
Also 2nd Lord Mordaunt and his two wives. Effigies lie side by side, but he
is raised higher than his wives. 3rd Lord Mordaunt 1601. An unusual tomb-
chest with a black cloth of stone hanging dawn like a pall and the inscription
in white on it.