A Grade I Listed Building in Keyworth, Nottinghamshire 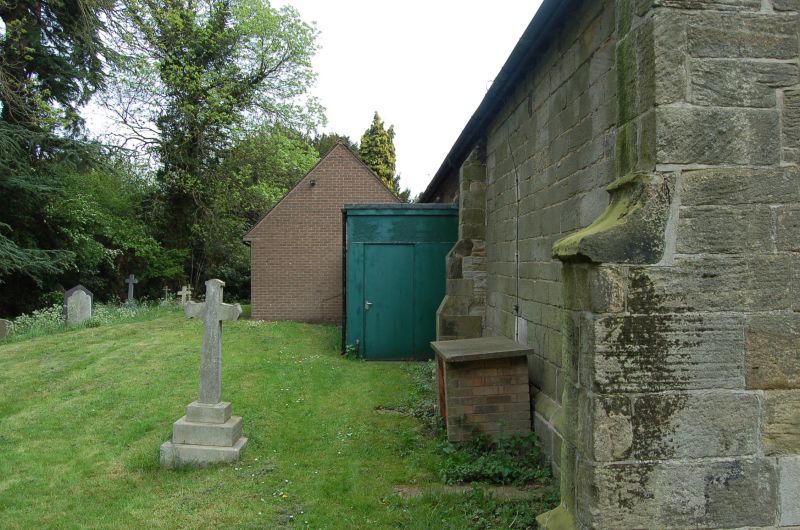 Parish church. C14, C15, restored 1874, 1884, C20. Dressed
coursed rubble and ashlar, some brick. Plain tile roofs to
porch, nave and chancel and remainder lead. Coped gables with
single ridge cross to east chancel and porch. Tower with spire,
nave, north aisle, north porch, north vestry, south porch, south
west chapel and chancel. Early C15 tower of 2 stages set on a
deep plinth with parapet and the remains of 4 gargoyles to each
side with further single gargoyles at the angles. The angle
buttresses, at the final set off are gabled and crocketed.
Rising from each is a single pilaster strip with 2 tall blind
trefoil arched panels and similar crocketed gable over. Above
and set diagonally at each angle is a single similar pilaster
terminating at the parapet. In the centre of each side are
single similar taller pilasters rising from the first stage and
terminating at the parapet. Those on the north and south sides
are broken by single clock faces. Surmounting the tower is a
rectangular plinth with 4 rectangular openings on each side, this
supports a squat embattled octagonal turret which has 2
rectangular openings to alternate sides, the remains of 8
gargoyles and in turn supports a dwarf spire. The west wall of
the tower has a single arched restored C15 window with 3 lights
both under and above the single transom and cusped panel tracery.
To the left is a low projecting semi-circular stair turret with 3
rectangular lights above. Each side of the bell chamber has
single arched and cusped lights under flat arches flanking the
single pilasters. The west wall of the north aisle has a single
C19 window with 2 arched and cusped lights under a flat arch.
Projecting is the roof of a lean-to over a red brick cellar. The
buttressed north wall is set on a chamfered plinth and has to the
left a wooden porch enclosing the remainder of the north wall
which has a moulded pointed arched doorway and to the left a
single restored C14 window with 2 trefoil arched lights and
tracery under a flat arch. The east wall has a single restored
C14 window with 2 trefoil arched lights and mouchettes under a
flat arch. Attached to the left of the porch and projecting from
the north chancel is a large C20 brick and plain tile vestry.
The north wall of the chancel enclosed by this has 2 early C14
trefoil arched lights with hood moulds and label stops and
continuous sill band, to the left is an arched doorway. The
angle buttressed east chancel is on a low chamfered plinth.
Single arched, restored C14 3 light window with reticulated
tracery, hood mould and label stops and continuous sill band
which extends to the buttressed south chancel with single
restored C14 arched 2 light window with reticulated tracery, hood
mould and label stops. To the left is a single trefoil arched
and cusped light with hood mould and label stops and further
left a single similar window but lower and with single low
transom. The south nave has 2 C14 2 light windows each with
trefoil arched and cusped lights under a flat arch. The gabled
porch has a double chamfered arched entrance. The side walls
each have a single arched and cusped light under a flat arch.
Inner double chamfered arched doorway. To the left is the chapel
set on a chamfered plinth and buttressed. Single restored C15
window with 2 cinquefoil arched lights under a flat arch. The
west wall has a single similar restored window. Interior. 2 bay
late C14 nave arcade with double chamfered arches'and single
octagonal column with moulded capital. Double chamfered tower
arch, the inner order supported on corbels. C19 chamfered and
moulded chancel arch with C19 rood screen. The inner chamfer
supported on corbels. Nave/south chapel double chamfered arch,
the inner order supported on corbels. Tower/south chapel and
tower/north aisle both with double chamfered arches, the inner
chamfer supported on corbels. South chancel wall has arched
piscina with inner trefoil arch. Aumbry to north wall. North
doorway with hood mould and label stops. The east window of the
south wall with low sill forming a sedilia. Chair with Cl?
carved back. C19 ashlar pulpit with blind tracery. Ashlar font
with C19 pedestal and C12 circular bowl.