Chantry Chapel of All Souls

A Grade I Listed Building in Higham Ferrers, Northamptonshire 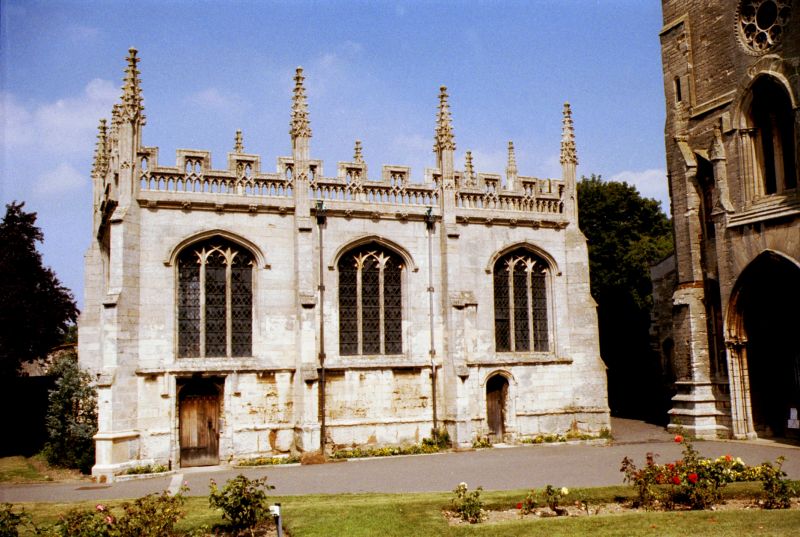 GI
School,now chantry chapel.Probably re-founded as a school and built early C15 for Archbishop Henry Chichele.Restored C20.Limestone ashlar with lead roof. Single-unit plan. Single storey.South elevation of three-window range of three-light windows with cusping and four-centred arch heads.Small doorways below windows to left and right. Both have four-centred arch heads, that to left has leaf decoration in the spandrels. Three-stage buttresses at corners and between windows terminate as crocketted pinnacles with panel tracery decoration.Moulded cornice with corbels representing leaves and flowers.Open castellated parapet, with verticals and diagonals decorated with cusping.Shallow gabled roof. Five-light east window with panel tracery and four-centred arch head.Open castellated parapet similar to south elevation has canopied niche with statue and pinnacle at apex.North elevation is similar without doorways.West elevation is similar to east with a four-light square-head window below main east window.Parapet with niche is all similar.Interior: has staircase to former rood loft on first floor,with two doorways with four-centred arch head.Original moulded roof beams restored C20 when a steeper pitched roof was removed and original pitch restored. Plank door set in panelled lobby has date above 1630.C20 stained glass roundels in west window.Tablet in lobby commemorates restoration by J. White Esq., 1942.Used as a Grammar School from 1542-1906.Restored by Temple Moore early C20.Re-dedicated as a chantry chapel in 1942.