A Grade I Listed Building in Alnwick, Northumberland 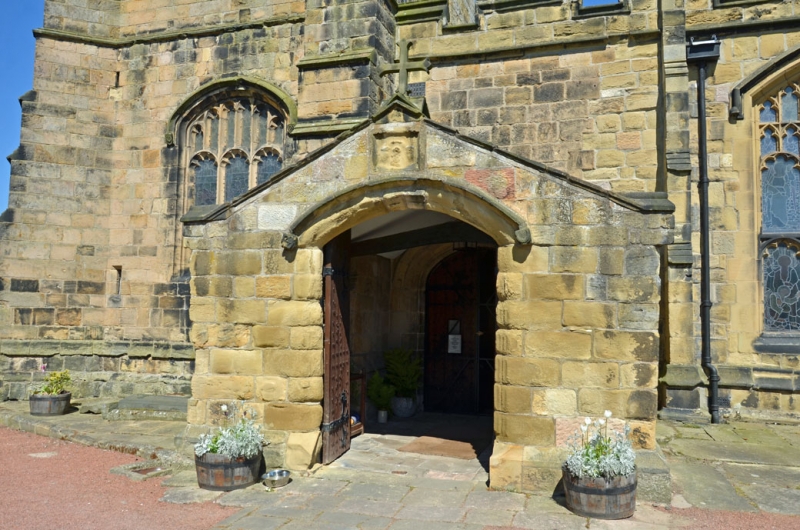 A Parish church of 1464 built under Henry VI, incorporating fragments of a Norman chapel, extended in the C14. It is perpendicular in style and a rare example of church building in Northumberland at a time when conditions allowed little church building in the county. It notably incorporates a defensive tower. Later C18 Gothicisation was reversed by Anthony Salvin in 1863.

MATERIALS: the church is built of roughly coursed squared stone with ashlar dressings. The roofs have slate coverings and the windows have stone perpendicular tracery with leaded and stained glass windows.

PLAN: the church is situated in the northern outskirts of the town of Alnwick, on a high bluff overlooking the River Aln. It is a parallelogram comprising a five bay nave and a slightly taller three bay chancel with wide aisles and chapels; there is a three-stage tower and south porch at the south-west end, a projecting turret at the south-east end and vestries and a north porch appended to the north aisle.

EXTERIOR: The long embattled south aisle is lit by three-light perpendicular windows, separated by pinnacled buttresses. There is a simple priest's door into the south chapel and adjacent to this, a projecting polygonal turret with a corbelled-out top and chamber, rise above the chancel roof. This appears to have had a defensive function as its upper levels carry embrasures. At the west end of the church, there is a wide gabled porch with carved stone cross and double wooden doors with hood mould and carved stops. The embattled tower has angle buttresses with twelve set-offs ending in pinnacles; the ground floor has a segmental headed window with perpendicular tracery, the second stage has paired narrow openings, and the third stage has a perpendicular slatted window. The east end has three perpendicular windows, separated by stepped buttresses surmounted by pinnacles; that lighting the south aisle has five lights and that to the north aisle has four lights, both with complex tracery; the east end of the chancel including its five-light window date from the C19 restoration. The west end has a three-light window (a C19 replacement for a decorated original) and a small trefoil lancet window of c. 1300, incorporated into the later church from its predecessor and indicating the presence of a formerly narrower nave.

INTERIOR: within the church the aisles have double chamfered arches: the north arcade has hexagonal piers with much moulded caps and paired fluted faces; this largely dates to the C19 when the old arcade was removed to allow the fitting of galleries. The south arcade has plain octagonal piers and carved corbel heads at the rear, slightly altered when the tower was built necessitating the construction of the large buttress which projects out into the nave. The chancel arch is also C19 but with re-sited Norman diaper work above and the chancel arcades are higher and more delicate having octagonal piers containing eight keeled shafts within cusped-head panels and angels at the arcade springing level; the capitals are richly carved with stylized foliage of varying types; the Hotspur capital on the north carries the crescent and fetterlocks of the Earl of Northumberland. The nave roof is original with contemporary bosses and the arch-braced trusses vary in detail including two with cusping. All woodwork within the church including the full compliment of benches and the upper part of the stone pulpit dates from the C19, and of particular note are two parclose screens and twenty-two choir stalls decorated with carved foliage installed in 1863 and carved by local craftsmen. In the south east corner of the chancel, a simple segmental-headed doorway with a studded oak door gives access to an unworn stone spiral staircase (formerly higher) and into an adjacent chamber (formerly larger), interpreted as a priest's room and lookout. At the south-west corner of the nave, access to the tower is gained through a rectangular chamfered entrance with a wooden boarded door; above this door there is a carving of a pair of shears with a lock above, possibly a re-used grave cover. The lowest chamber of the tower incorporates grotesque carvings on its ceiling's supporting piers and a stone spiral stair with worn treads gives access to a first floor ringing room and then to the third stage belfry; the three bells with their stocks and wheels remain in situ and the two smallest are thought to be medieval while the larger bell was recast in 1764.

FIXTURES AND FITTINGS: the modernist font of blue Kilkenny limestone is by David Edwick of Hexham. The stained glass, with the exception of C15 fragments including a depiction of a pelican in the north aisle west window, is all of C19 date and contains what is described in Pevsner as 'an uncommonly complete and enlightening survey of C19 glass'; it includes work by renowned practitioners including Clayton & Bell, Lavers & Barraud, James Powell and Ward & Hughes. Sculptures and monuments within the church include late C15 statues of Henry VI and a martyr saint, early to mid C14 effigies of a knight (with carved weeper in the form of a monk) and lady under projecting crocketed canopies and a later C14 effigy of a clerk. In addition there are various tablets including one of 1737 with an etched portrait on a bronze roundel by T King of Bath and another by Dunn of Alnwick and several C17 and C18 ledger stones within the chancel. A large Flemish chest of early C14 date decorated with foliage and dragons and a hunting scene is of the very highest quality. Beneath the tower, and to the west of the south porch, there is a collection of c. 20 C12 to C14 cross slabs, some with unusual emblems.

SUBSIDIARY FEATURES: the church is situated within a large churchyard bounded by stone walls with triangular coping stones and entered at the south east corner through a wrought iron lych gate; the latter has double metal gates attached to ornate stone pillars capped with bell-shaped finials.

St Michael's Parish Church was rebuilt under Henry VI who granted the burgesses of Alnwick tolls on exports from the Port of Alnmouth to 'make and repair their church' in c.1464. This was part of a bid for the support of the Percy family, Earls of Northumberland, during the Wars of the Roses. Reports of a Saxon church on the same site are unconfirmed although the presence of a Norman chapel has been confirmed; this chapel was itself extended in the C14, and fragments of the early chapel and parts of the C14 north and west walls are incorporated into the present church. Turbulent conditions on the English border during the C14 and C15 centuries meant that this was not a time of peace and prosperity for Northumberland and little church work took place in the county. Such work was generally confined to what were considered the safer areas in the south of the county and close to the coast, leading to an absence of newly built decorated and perpendicular work. St Michael's Alnwick is a rare example of the perpendicular style and owes its existence to the relationship between the Monarch and the Earls of Northumberland.

St Michael's was restored and Gothicised in 1782 by Vincent Shepard, a process which included the installation of a plaster fan-vaulted chancel ceiling and a tabernacle with rows of seats for local dignitaries. In 1818, extra seating in the form of a west gallery was included. The church has a close relationship with the Percy family and Alnwick Castle, and architect to the fourth Duke of Northumberland, Anthony Salvin comprehensively removed the C18 Gothic and the early C19 gallery and restored the overall perpendicular character of the church in 1863. As his entry in the ODNB is clear, Salvin (1799-1881) was widely regarded as an expert on medieval buildings and received many commissions relating to the restoration of castles and churches; by the end of his career he was held in high regard, although his approach of removing earlier work rather than retaining it, has been questioned subsequently. He has dozens of listed buildings to his name, many in the higher grades. In the 1880s a sacristy and vestry were added to the north aisle, and in 1890 an organ chamber was inserted by F. R. Wilson (1827-1894), a local architect with c. 30 listed buildings to his name, who worked as assistant architect for Anthony Salvin during his restoration of Alnwick Castle.

The Parish church of St Michael's is designated at Grade I for the following principal reasons:
* Architectural interest: it retains extensive medieval fabric, largely from a single phase incorporating fragments of an earlier Norman church, extended in the C14.
* Association: its construction is associated with the Monarch Henry VI and it was restored by Anthony Salvin and F. R. Wilson.
* Timber elements: it retains original early timber elements including structural features such as the nave roof and bell frame in the west tower, and an early C14 decorated Flemish chest.
* Historic interest: it is a rare example of the perpendicular style in Northumberland, constructed at a time in the C15 when social conditions precluded extensive church building; the inclusion of a defensive turret reflects the turbulent times of the Border area.
* Stained glass: the church contains a collection of stained glass representing many of the notable national C19 practitioners.