Church of St Michael and All Angles

A Grade I Listed Building in Felton, Northumberland 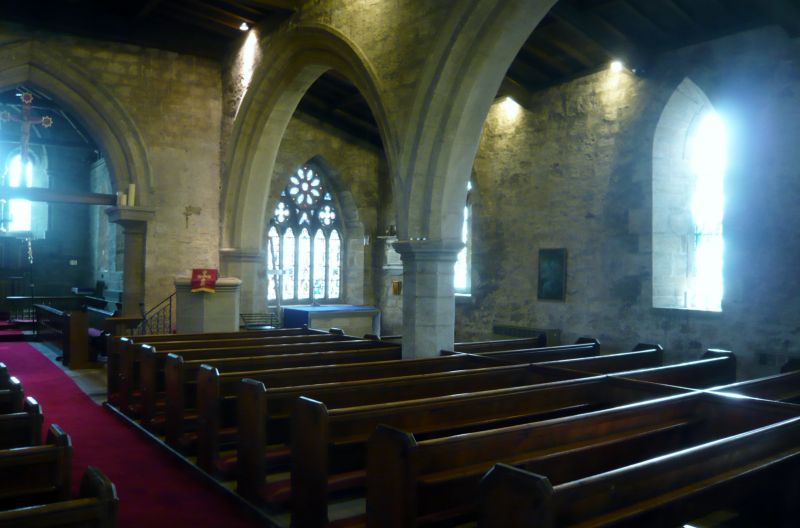 Entry Name: Church of St Michael and All Angles

Church of England Parish: Felton St Michael and All Angels

West end shows central projecting turret with small loops, carrying belfry
with twin square-headed openings to east and west and single openings to
north and south; pyramidal stone cap. Flanking tall 2-light windows of 1870
and heavy stepped west-facing angle buttresses of former aisle less nave; at
right-angles to these the other parts of the buttresses may be seen in the
masonry of the added aisles. Blocked window in north aisle; small chamfered
lancet in south aisle; diagonal stepped south-west buttress.

Gabled projecting south porch with hollow-chamfered arch under a moulded hood,
probably re-set, between irregular buttresses formed from cut-down side walls.
Block sundial dated 17.. above. Shallow but taller gabled projection behind
is south end of older porch, with lower courses of diagonal buttresses
surviving. Interior with stone benches, vault on chamfered ribs and late C19
double doors in arch of two continuous chamfers. To west a C19 two-light
window with the head of older lancet above and flower-carved stone to right.
To east chamfered plinth, stepped buttress, three C19 windows and diagonal
stepped buttress. Five-light window, with Geometrical-traceried head
cut from a single slab, in east end of aisle.

Interior: Five-bay north arcade of double-chamfered arches with chamfered
hoodmoulds on octagonal columns with moulded capitals; earlier semicircular
east respond. South arcade is made up of double-chamfered west arch on
semicircular responds (perhaps re-set), a length of c.1200 nave wall with the
original south doorway, chamfered arch on shafted jambs (inner order cut
away) with tall round-headed rear arch, and 2 broad eastern arches similar in
detail to north arcade. To east of original doorway a small carved recess
probably for stoup; above and to east are traces of blocked windows. Rear
arch of the present south door is end of vault of older porch, with one
chamfered rib.