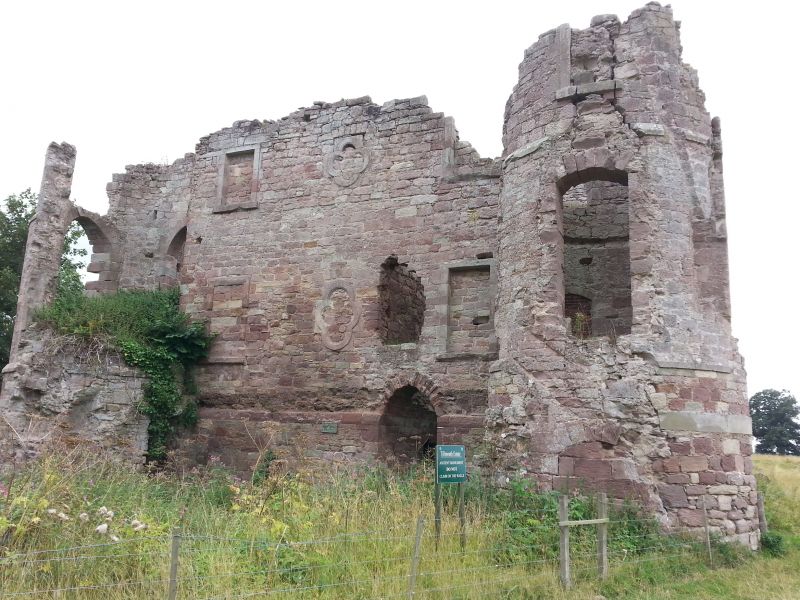 Ruined house. Begun c.1770 by and for Sir Francis Blake with the assistance
of Nisbet of Kelso, but incorporating some of the masonry of a medieval castle.

The original north wall, between the towers, has gone. The present north
wall was formerly internal and is partly medieval with openings of the C18
and blocked earlier openings including large segmental arches and a 2-light
mullioned window. This wall is c.70 inches thick.

Interior: the ground floor has 4 large vaulted rooms along the south front.
Three are tunnel vaults, the fourth, behind the central bow has a central
groin vault with 2 flanking tunnel vaults. All of these are in fine ashlar.
The west vault has holes for a timber floor. The angle towers were also
vaulted on ground floor; of these the south-west tower has a shallow stone
dome and the south-east tower a brick dome. In the north towers only the
springing of the vaults remain. There are also 2 corridors with pointed
brick tunnel vaults and two small rooms whose vaults have collapsed. On the
present north wall the springing of a groin vault can be seen at lst-floor
level.

Building on the house was continued for almost 50 years and never completed.
The house was to be vaulted throughout as a precaution against fire.

Mackenzie: History of Northumberland: Newcastle: 1825. Proceedings of the
Society of Antiquities 2nd Series Vol. IV for the reference to Nisbet in a
letter from Ford Castle.