The Priory Church of St Andrews'

A Grade I Listed Building in Hexham, Northumberland 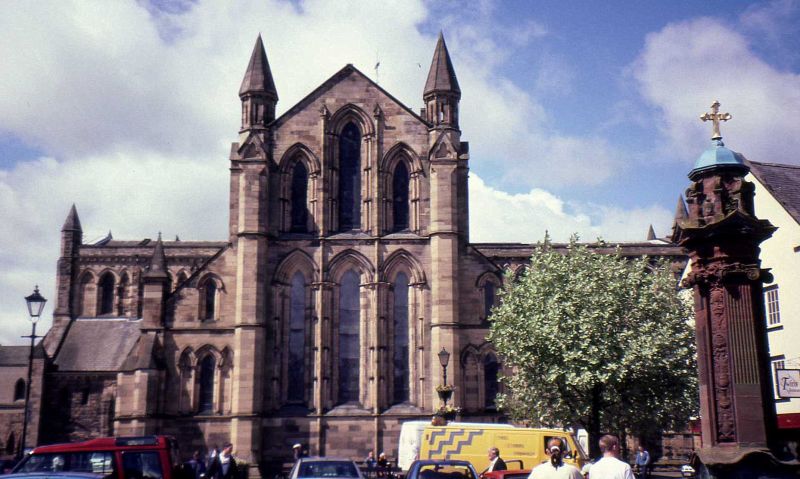 Former Augustinian Priory. Originally founded by St Wilfrid circa 673 - the
crypt dates this period. The choir, transepts and tower are circa 1180; the
nave was burnt 1296 and rebuilt in 1908 by Temple Moor. Much recent restoration.
Embattled crossing tower. 5 bay aisled chancel, the easternmost taken down
and rebuilt slightly higher circa 1858; fragments of possibly late-Saxon apse
below. 3 bay transepts with eastern aisles. South bay of south transept has
slype with gallery to night stairs above. 6 bay nave, Exterior uniformly
early English, apart from decorated tracery of nave windows. Lancets, corbel
table etc.
Interior also chiefly Early Englih, much restored and altered. Wooden ceiling,
vaulted aisles, with dado arcades, to transepts and chancel. High stilted
arches on west wall of north transept with clustered shafts. 2 chantries -
to Prior Ogle (d.1410), and to Prior Leschman (1480-91), the latter with a
cowled effigy and much rude stone sculpture. Early C15 sedilia with painted
panels, including the dance of death. Delicate Rood Screen (1491-1523) with
panel painting and rich woodwork. Misericords in stalls. Font at west end
of nave with, for base, part of a pilier cantonne from the north transept with
a dog tooth central shaft. Interior also contains several monuments: relief
of a Roman standard bearer; St Acca's Cross [C7], cross base with Crucifixion
from the Spital, the Frith Stool, or St Wilfrid's chair and various fragments
built in the nave walls.

St Andrew's Church together with the listed buildings in the Market Place, form a group, of which Nos 8, l0 and 16 are of local interest.