A Grade I Listed Building in Belsay, Northumberland 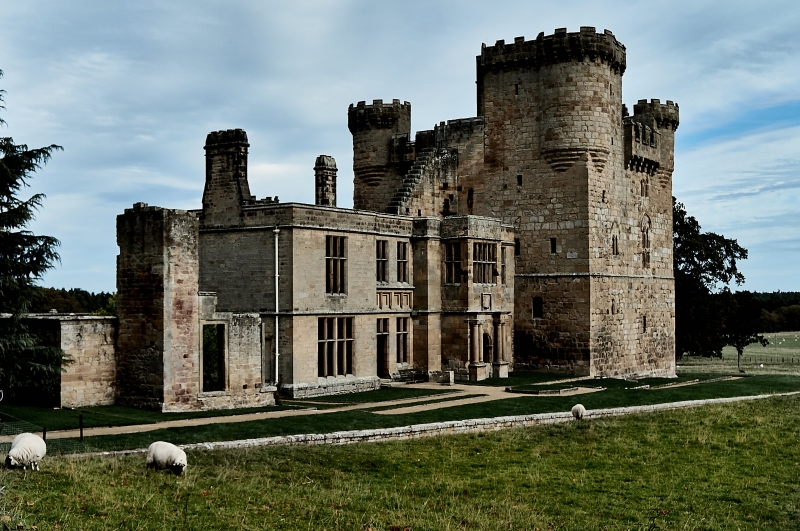 Squared stone and ashlar. Tower has lead roof, house is roofless.
Tower of 3 storeys stepped in at first floor. Chamfered plinth. South side:
on ground floor a slit window; on first floor a large 2-light mullioned-and-
transomed window with cinquefoil heads to lights, and left of this a smaller
2-light mullioned window with trefoiled heads; on 2nd floor a 2-light mullioned
window with cinquefoil heads. Battlemented machicolated parapet on close-set
triple-step corbels; higher round corner turrets on multi-moulded corbels;
turret to left is higher still and flanked by square projections. North side:
C19 doorway; 2-light mullioned-and-transomed window on 1st floor and smaller
2-light mullioned window on 2nd floor both with cinquefoil heads to lights.
Garderobe chute. West side: (i.e. now within attached house) has a recessed
centre section, and set within it a doorway with pointed arch and chamfered
surround; on the 1st floor a Tudor-arched blocked doorway, and on the 2nd floor,
largely covered by a C19 external stack, a pointed-arched doorway with chamfered
surround.
House of 2 storeys has original 2-storey porch with round-headed multi-mullioned
doorway flanked by paired Tuscan columns; Middleton coat of arms above doorway
in moulded frame and inscription above that; on 1st floor a 5-light mullioned-
and-transomed window. Walling and windows to right of porch seem partly original;
other external features of mid C19 in similar style.

Attached to north side of tower is a 2-storey barn, altered C18 and C19 but
largely of medieval masonry. It has, on east side, a blocked 2-light mullioned
window and several blocked small C16 windows; on the west side, five C18 bays
with doorway in 4th bay; all openings have raised surrounds and are now boarded
up.

Interior: The plan of the tower shows on each floor a large chamber taking up
the whole eastern side, with short projecting wings on either side of the
entrancecontaining staircase, smaller rooms and garderobes.

Large pointed tunnel-vaulted kitchen on ground floor has fireplace with
segmental arch. Hall on 1st floor has traces of C15 mural decoration. The
stair has an umbrella vault above with 8 chamfered ribs.