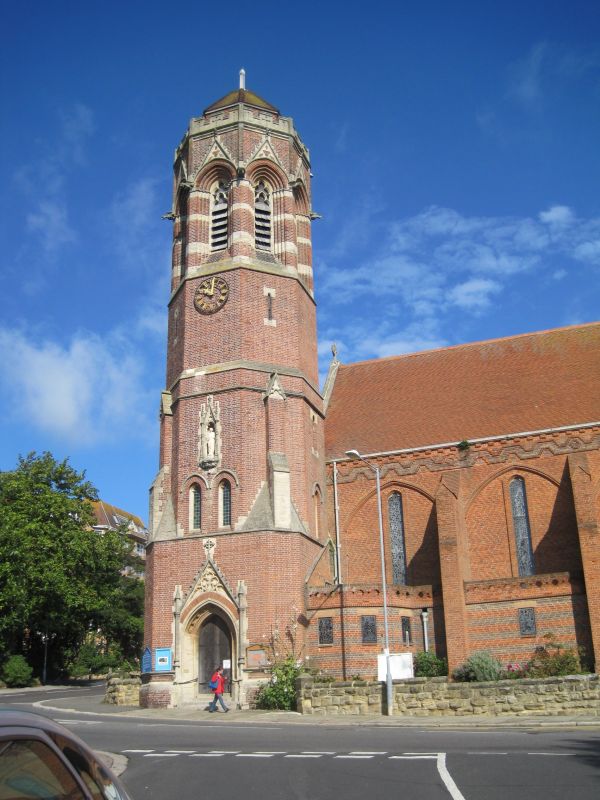 Parish church. 1950-54. H.S. Goodhart-Rendel, retaining 1881 tower and baptistry and west facade by Arthur Blomfield. Red brick with yellow brick patterning. Stone dressings to the tower. Steeply pitched plain tiled roofs to eaves. Interior lined with stone dressed render. Aisled nave, dwarf transepts, altar against east wall of chancel, double chancel arch with choir gallery, baptistry in polygonal apse at west end. Entrance beneath south-west tower. Tall church on prominent site, dominated by four stage Victorian Gothic octagonal tower, which culminates in richly moulded pointed louvres in the top stage, a battlemented parapet and pointed roof. Body of church is powerfully massed in an eclectic free Gothic manner with powerful brick buttresses rising from the aisles to support tall clerestory, with pointed lancets in pointed relieving arches. Bell turret above chancel arch. Transepts expressed as paired hipped dormers, and polygonal stair tower to choir gallery is expressed below. Chancel roof slightly lower than nave roof, sweeping low on same plane as transept roof. Small two-storey red brick addition to south.
Internally original altar remains against east wall but a new altar has been placed on a step in front of the chancel arch. Walls of honey-coloured stone and render. Broad, tall nave with low passage aisles and tall lancet clerestory within pointed relieving arches, which open out into the transepts as one and a half bays of arcade with an octagonal pier to the north and one to the south. At right-angles to this runs the plane of the chancel walls, with three arches at lower level, a choir gallery in the centre and an upper chancel arch above. All arches are pointed except for the lower chancel arch, which is round-headed, and all are moulded. 3-light east window with cusped heads. Roofs panelled and painted pale green with pointed and moulded transverse arches. Stained glass mainly by Ledger, Goodhart-Rendel's preferred designer, using much white glass, including figures in nave windows. Baptistry windows by Miss Thompson. Victorian font, square with four marble subsidiary columns around circular column base. Some furniture also Victorian, including the eagle lectern, some of the choir stalls with their small statues of the Apostles, the Bishop's chair and the stalls of the Lady Chapel; all except the lectern painted in Goodhart-Rendel's pastel colour scheme. Octagonal wine glass pulpit also in pastel green, blue and salmon. Six-pointed metal chandeliers.
A very impressive and beautifully detailed church by this major church architect, on a prominent site. Goodhart-Rendel was a leading authority on Victorian Gothic architecture, and this was his only opportunity to add to a church of that period. The result was a purer Gothic treatment than in the designs in which he had an unconstrained hand, where he more commonly adopted a round-arched interpretation and incorporated modern materials. This church is a particularly eclectic mix.