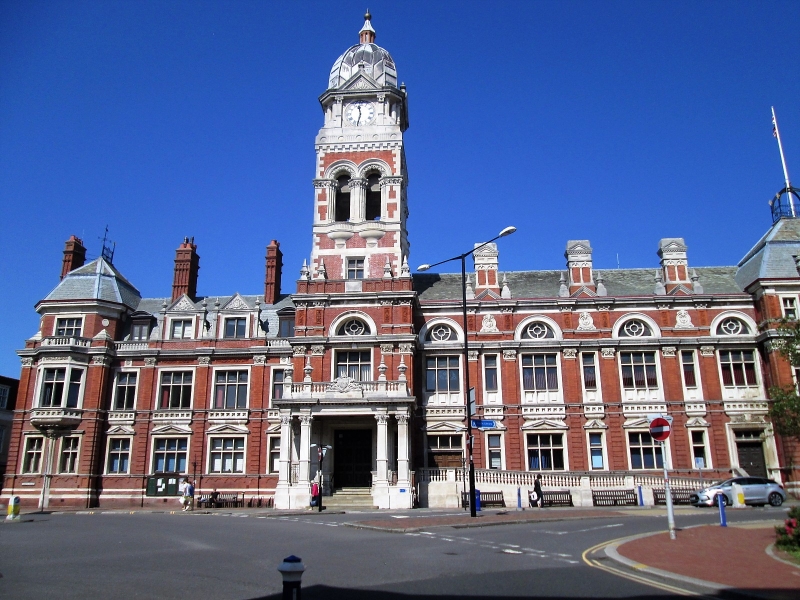 Town Hall. Designed after a competition by the Birmingham architect W
Tadman-Faulkes in 1880, foundation stone laid on October 9th 1884 and building
opened on October 20th 1886. Clock by Gillett and Johnson installed in 1892. Free
Renaissance style. An asymmetrical building in red brick with moulded brick
decorations, Portland stone dressings and slate roof with 3 remaining brick
chimneystacks. Two storeys and attics; 16 windows. Mainly mullioned and transomed
casements. The principal feature of the building is the off-central 130 feet high clock
tower in the 6th bay from the left. The bay projects with triple mullioned and
transomed casement to first floor with Diocletian window above, flanked by moulded
brick pilasters and surmounted by panelled parapet with stone obelisk-shaped finials.
wooden double door and flight of steps to street. Stone portico with 4 stone piers,
balustrade with attached high relief shield and 4 partially gadrooned urns was not part
of the original design. The clock tower is of 2 stages, the lower with mullioned and
transomed casement, the upper with paired round-headed opening. Four pedimented
clock faces flanked by pilasters and elongated dome with finial. To the right of the
clock tower is a wing of 2 storeys and attics 7 windows. This comprises alternate triple
windows with pediments on ground floor and Diocletian windows to attic and single
windows, divided by pilasters and with decorated aprons below ground floor. Three
pedimented features with round-headed blank arches and flanked by stone urns
conceal chimneystacks. Elaborate carved double doors in moulded architrave with
rectangular fanlight and moulded cornice with blank shield to end bay on right. The
right end terminates in a pavilion-like projection of 3 bays. this has a mansard roof
with cast iron cage for flagpole and central round-headed pedimented feature to
parapet. Central paired window, flanked by single windows with pediment to lower
floor windows. Central doorcase, similar to other two. To the left of the clock tower
is a wing of 2 storeys and attics 4 windows. The two central windows are triple
mullioned and transomed windows, the rest double, with pediments to ground floor
windows and aprons below. Pilasters between windows. Two central windows have
pedimented dormers, end windows are oval. Left end terminates in pavilion-like
projection of one bay. Attic floor is canted under mansard roof with mullioned and
transomed window, first floor has 4-light oriel and there are 2 paired mullioned and
transomed windows to the ground floor with aprons below. Pilasters at each end.
Interior includes original Council Chamber with joinery including panelling at dado
level. fielded above, strapwork design above this and guilloche panels and swags to
cornice. Elaborate curved pediments to doorcases and dais with pilastered screen.
The design for this building was so costly that the board referred the plans to Henry
Currey. He voted for the prizewinning design which cost 40,000 pounds.
(See "BOE Sussex" p487.)