A Grade I Listed Building in Burwash, East Sussex 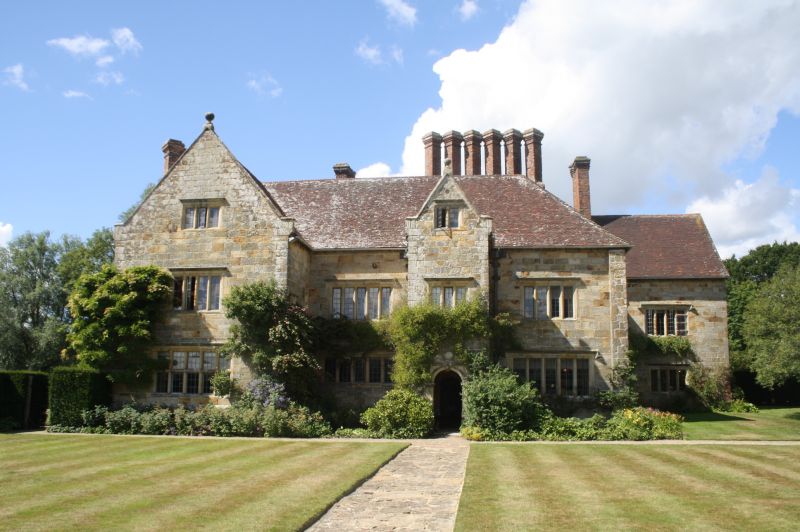 The property of the National Trust. It was built by a prosperous iron-master named
John Brittan in 1634 and prior to 1760 was called Lane Bridge. Ashlar. Tiled
roof. 2 storeys and attic in gables. The entrance front faces east. It has 5
windows and a chimney breast and was originally E-shaped but the north projecting
wing has been demolished. In the centre is a projecting porch with 2 storeys over
it surmounted by a gable with kneelers and ball finial. The porch has a round-
headed archway with pilasters and a scroll pediment having the date 1634 in it.
The south projecting wing also has gable with kneelers and a ball finial. To the
north is a recessed portion of 1 window. Casement windows having 3, 4 and 5 lights,
the one on the ground floor of the south wing with 2 tiers of lights and all having
stone mullions, transoms and dripstones over. The back of the house has 5 windows,
a projection nearly in the centre of the facade with a tile-hung gable over and
another tile-hung gable at the south end of the facade. The roof is surmounted
by an impressive row of 6 diamond-shaped red brick chimney stacks. The interior
has a contemporary staircase, fireplaces and panelling. The house was bought by
Rudyard Kipling in 1902, who occupied it until his death in 1936. It was bequeathed
to the National Trust by his widow-in 1940 together with the contents, and Kipling's
study is preserved as when he occupied it.