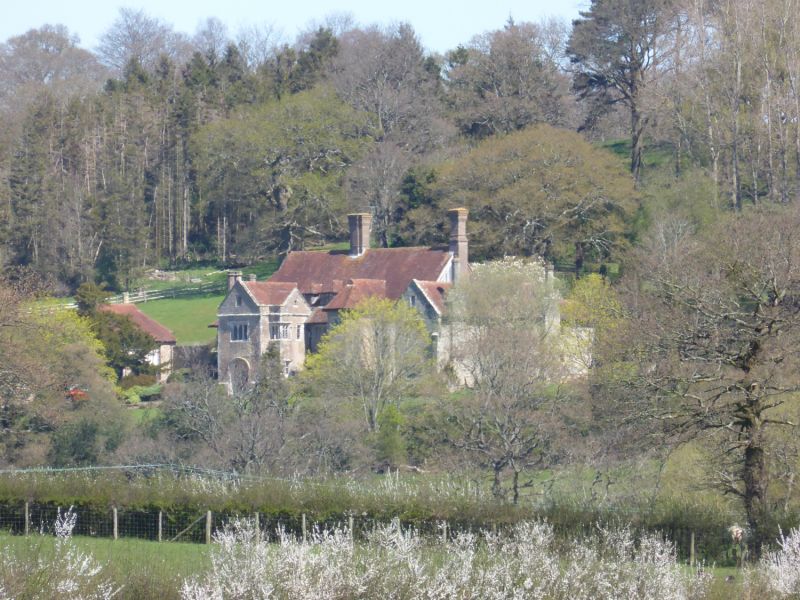 Rebuilt by Robert Oxenbridge in the C15 in sandstone ashlar or stone rubble with
ashlar dressings, to which a few alterations or additions were made in the C16
in red brick. The main front faces west. 2 storeys and attic. 8 windows. 2
dormers and 3 attic windows in gables. The hall was in the centre, the chapel
at the south end. The front has 3 projections. The southernmost one is C15 and
contains the chapel. It has a square-headed window of 2 cinquefoil-headed lights
on both ground and first floors. The other two projections are C16 additions
in red brick made by Sir Goddard Oxenbridge. The centre one has splayed angles
and a hipped roof, and originally had doorways into it from both the hall and
the solar but one is now blocked. The northernmost projection forms the entrance.
It has a gable to both its west and south faces and a four-centred doorway with
brick hood mould over. Buttress at the north west angle of the front. Casement
windows, mostly modern. The south front has one pointed C15 window and 3 cinquefoil
headed lights and tracery above, which lights the chapel, and 2 chimney breasts.
The east front has 4 windows and 3 large and two small dormers. Large C16 crow-
stepped brick gable in the centre. Modern casement windows. From 1712-1936 the
house was owned by the Frewen family of Brickwall, Northiam. This was one of
the finest historic buildings in Sussex but has recently been badly damaged by
fire and largely gutted. It has now been reconstructed and extended.