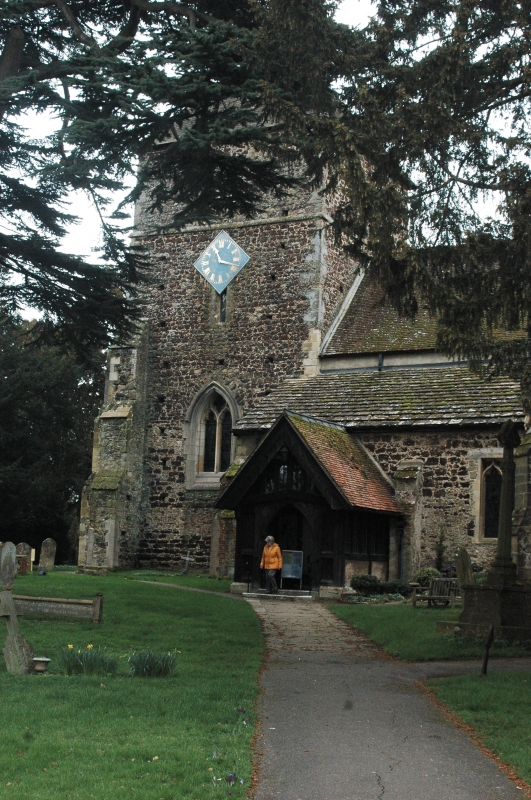 II*
Church. C12 core with later C12 aisles, C14 tower to west and chancel to east, restored in 1845 by William Butterfield and south porch added in 1862. Carstone and ironstone blocks with some coursed Bargate stone on transept, Bargate and clunch dressings with some Bathstone dressings to upper part of tower. Horsham slab pentice roof to south and on nave. Shingled pyramidal roof on west tower with raised ridge and gablets.

Interior: spacious, aisles open to nave in wide and open bays on round pier arcades with "crimped" decoration to arches and arches of crossings and doors. Half-octagonal pier responds to tower arch with chamfer and hood moulds. Braced tower posts visible inside. Chancel arch wide and high and to the west of it are the beginnings of another wide transverse arch, not continued and now capped by two early C20 statues, possibly the west arch of a former crossing although V.C.H. believed it to be former chancel arch superceded before completion. Main arch of north transept (Knoll Chapel) of two orders with moulded imposts. Arch of south transept with shafts of trefoil section and circular abaci and large floral corbels for multi-moulded ribbed arch to transept. Painted hammer-beam roof to chancel.

Fittings: triple sedilia on south wall with moulded arches on trefoiled inner order. Fine tabernacle and reredos either side of east window by William Butterfield with mosaic decoration, crocketed gables and tracery arcade above. One parclose screen in south transept. C14. Single panels with ogee tracery heads. Pulpit 1845. Octagonal and panelled on eight columns with ogee crocketed panels made up of remains from screen. Late C16 lectern on salamonic twist stand and strapwork base. Octagonal font.