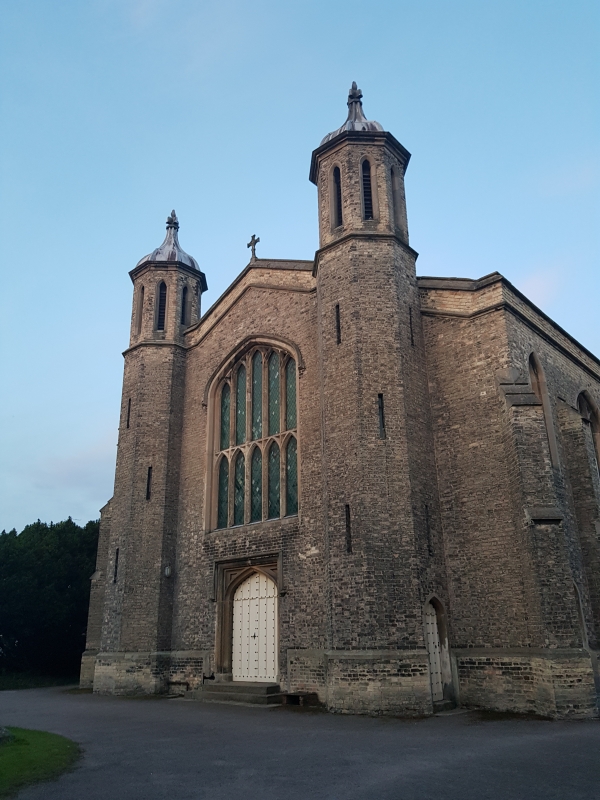 PLAN: Five-and a half bay nave, two aisles not structurally visible from without. Shallow chancel.

EXTERIOR: St Saviour is severely rectangular, of five-and-a-half bays (the half bay accommodating the lobby and gallery stairs at the west end). Solid parapets all round, above a cornice moulding. The very shallow chancel is typical of Late Georgian Commissioners' Churches; the east window has five lights and one transom, under a four-centred head with minimal tracery. The angles of chancel and nave have diagonal buttresses, and further buttresses mark the bay divisions north and south. The aisle windows are of three lights, also with a transom where the galleries formerly crossed the openings. There are side entrances beneath the fifth windows of the aisles, and then single lancets lighting the gallery stairs. The west gable is flanked by octagonal turrets with slim openings above the roof line, and ogee leaded caps. The west window is similar to the east, and there are double doors beneath a square hoodmould.

INTERIOR: The main features are the high four-centred arcades on octagonal piers, with moulded capitals and a continuous hoodmould. The roof structure is without elaboration: it has tie-beams braced to short wall shafts. The west gallery has plain panelled fronts, and short projecting stubs where the north and south side galleries were removed in 1936. At the east end of the aisles, on the north side is a screened organ chamber, on the south a small chapel without structural separation from the aisle. The walls and internal dressed stone have been painted.

PRINCIPAL FIXTURES: No original fittings survive. The nave is carpeted and has moveable chairs, from a reodering of 2001. Simple pine pews of 1878 survive in the gallery. The high altar is plain oak, big and panelled, and came from Southwell Minster. The reredos is also probably early C20, with painted panels and a fretted frieze. Gothic altar rails probably of 1877-8. The oak pulpit has Perp-style arcading, and the date 1878 in a foliage frieze. Small stone font installed in 1971. Monuments: in the sanctuary is a First World War memorial, of opus sectile. The aisles have a few early C19 tablets, Grecian or Gothic. Stained glass: in the north aisle, the lower parts of two windows are by C.E. Kempe & Co. Ltd (memorials 1907 and 1916). The east window is typically glass of 1882, and in the south aisle is one good window of 1980, to John Lancaster, unsigned.

HISTORY: Moorgate Chapel of Ease or St Saviour's Chapel, originally in the parish of Clarborough, occupies a two-acre site given by Henry Clark Huchinson of Welham. The foundation stone was laid on June 2, 1828, and the opening ceremony was on September 27, 1829. The chapel seated c. 1000, with 600 free sittings; the cost was c. £4,000. It served the populous districts of Moorgate and Spital Hill, relieving the burden on St Swithun, East Retford. From March 1877 the interior was reordered with new seats, lectern, organ and pulpit, reopening on January 9, 1878. The north and south galleries were removed in 1936. Alterations in 1970 included a new roof and new internal west doors. In 2001 the church was relit, carpeted and decorated, and the pews replaced by chairs. St Saviour was the first major work of Edward James Willson (1787 - 1854) of Lincoln; he was an architect, antiquary, councillor and magistrate. He developed a considerable knowledge of Gothic architecture, largely through observation at Lincoln Cathedral, and collaborated in the publication of John Britton's Architectural Antiquities (1807-10). Sir Howard Colvin wrote of Willson that 'in his own Gothic churches (usually built of yellow brick) he failed to translate antiquarian knowledge into effective design'. His papers including architectural drawings are held at the Society of Antiquaries, London (microfilm copies at Lincoln Archives). The church has groups value with the vicarage at 2 Welham Road (g.v).

REASONS FOR DESIGNATION:
St Saviour's Church, Lidget Lane, East Retford, Bassetlaw, is designated at Grade II for the following principal reasons:
* A Commissioners' Church of 1828-9, the first major design by E.J Willson of Lincoln
* A significant local landmark in an area of early C19 brick housing, denoting the industrial expansion in the district.
* Almost unaltered externally, and with a quite imposing west end flanked by `pepperpot' turrets
* Successive reordering have left the church almost entirely without its original fittings
* Two good early C20 windows by C.E. Kempe & Co. Ltd, and one unsigned of 1980