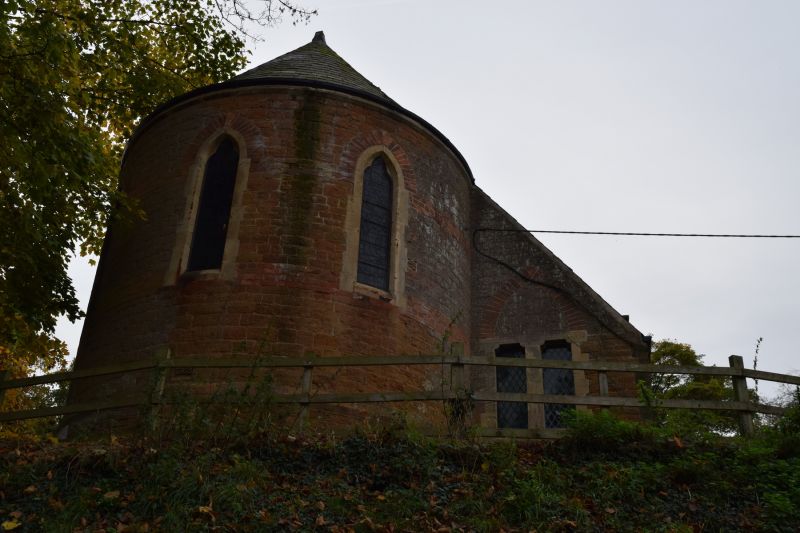 Chapel of Ease. 1862. Ashlar with red brick dressings. Slate
roofs with decorative ridges and coped gables with single ridge
crosses to porch, bellcote and east nave. West bellcote, nave,
south porch, north vestry/organ chamber and chancel. Buttressed
and set on a chamfered plinth with continuous flush sill and
lintel brick bands, broken by the buttresses. Ashlar bellcote
supported upon an ashlar base which is mounted on to the apex of
the west wall. The lower edge of the base is broken by 2 open
trefoil arches and is in turn supported on 3 foliate decorated
corbels. Over the trefoils is a single decorated quatrefoil. In
the bellcote is a single trefoil arched opening containing the
single bell, at the outer angles are single columns with foliate
capitals which support the gable over containing in the apex a
single circular panel with carved figure. The west wall has 3
lancets, the single central lancet being taller. The north nave
has 3 windows each with 2 pointed arched lights surmounted by a
single circle. The north vestry has a segmental pointed arched
doorway. Adjacent the east wall is a single flight of ashlar
steps leading down to a doorway with plank door. Above is a
single 2 light window under a flat arch with flush pointed
relieving arch over. The apsidal east end has 3 tall trefoil
arched lights. In the south chancel wall is a single pair of
similar lights. The south nave has 2 windows corresponding to
those of the north nave. To the left is the porch with moulded
arched entrance, the inner order supported on columns with
foliate decorated capitals. The outer order supported on imposts
being chamfered under with broach and bar stops. There is a hood
mould with human head label stops. Over, in the gable apex, is a
single circular panel decorated with carved head. Inner
chamfered arched doorway with imposts, the chamfering under with
bar stops. Interior. Double chamfered chancel arch, the inner
chamfer supported on columns with decorative capitals, the outer
chamfer to nave and chancel supported on similarly decorated
capitals with portions of colonnettes in turn supported on angel
carved corbels. The roof at the juncture of chancel and apse is
supported on similar colonnettes, capitals and foliate carved
corbels. Chancel/north vestry arch. Under the east windows
extends a continuous moulded band with foliate stops. In the
south side is the remains of a C12 piscina decorated with crude
volutes. Octagonal ashlar font. Flanking the chancel arch are
single boards with quotations from Exodus Chap.XX. There is a
C19 painting with scenes of the medieval church and the C19
church. Some C19 monuments.