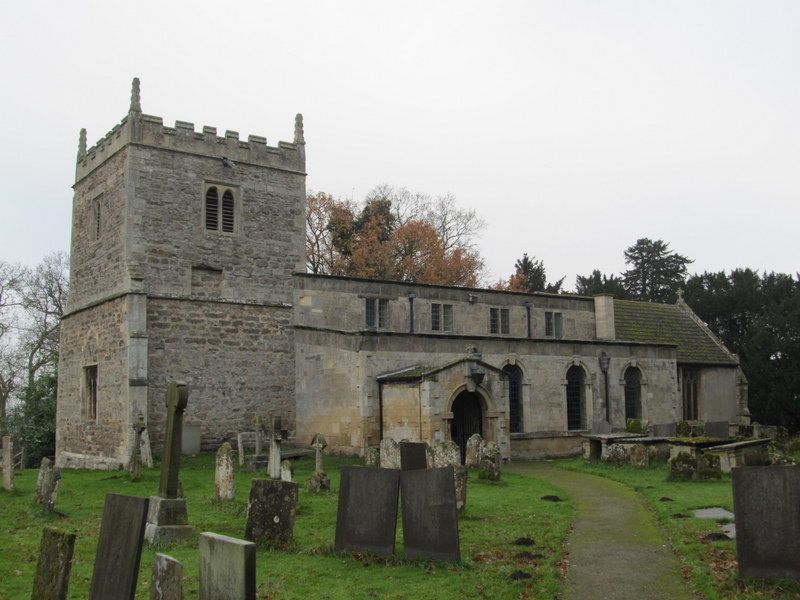 EAST STOKE SCHOOL LANE
SK 75 SW
(east side)
2/16
Church of
St. Oswald
16.1.67
G.V.
II*
Parish church. C13, C14, largely rebuilt 1738, clerestory
rainwater heads dated 1757, chancel restored 1873. Ashlar,
dressed coursed rubble and red brick. Concrete pantile roofs.
Parapets to south and east nave and south aisle. Single ashlar
stack to south east nave. Single decorative ridge cross to east
chancel. Tower, nave, south aisle, south porch, north vestry,
chancel and north chancel porch. Low buttressed C13 tower,set
on a chamfered plinth to the west and a lower plinth to the
north, of 2 storeys with band and C19 embattlements with 4
decorative pinnacles. West wall has a single C14 window with 3
ogee arched and cusped lights and mouchettes under a flat arch
with flush ashlar quoin surround. The south wall has a single
blocked opening above the band. The west, south and east bell
chamber openings each have 2 arched lights under a flat arch,
with remains of cusping to the west and east. The north has a
single pointed arched opening with 2 pointed arched lights.
There are single blocked stair lights to the north and south.
The buttressed north nave is set on a plinth and has a round
arched and blocked doorway. To the left are 2 C18 round arched
windows each with keystone and impost blocks. The red brick and
slate C19 vestry is set on a rendered plinth and has in the west
wall a 2 light window with single ashlar mullion under a flat
arch and with hood mould and label stops. The chancel is set on
a rubble plinth and there is a sill band broken by the porch on
the north side. The shallow gabled and coped C19 porch with
kneelers and remains of a single ridge cross is set on a plinth
and has a chamfered arched doorway. The buttressed east end has
a single restored C14 arched 4 light window with cusped tracery,
hood mould and human head label stops. The buttressed south
chancel has a cellar opening with metal grille. To the left are
2 C19 3 light windows with cusped tracery under flat arches.
Between the windows are steps leading down to the cellar. The
east wall of the south aisle has a sill band. The south aisle
with raised quoins has 3 C18 round arched windows with keystones
extending to the top of the parapet and impost blocks. The sill
band under extends to the gabled and coped porch with remains of
a single ridge cross and raised quoins. There is a round moulded
arched entrance with decorative keystone extending to the ridge,
impost blocks and decorative double iron gates. The inner round
arched doorway has impost bands and C17 6 fielded panel round
arched door. The clerestory has 4 C18 windows each with 2 lights
and single ashlar mullion under a flat arch. Interior. bay
C18 nave arcade with Tuscan columns and responds,the arches with
keystones. Double chamfered C13 tower arch the inner chamfer
supported on colonnettes with capitals decorated with nailhead,
the outer chamfer supported on slim engaged shafts with nailhead
imposts. C19 double chamfered tower arch supported on responds
with foliate decorated capitals, over is a hood mould and human
head label stops. Flanking the arch are single quatrefoils in
round panels. South chancel has an ogee arched piscina. North
porch doorway has a hood mould and decorative label stops, there
is an arched doorway to the north vestry. C19 circular font
with decorative bowl. The furniture is C19 apart from a small
metal C15 chest. Monuments include in the south chancel a brass
plaque mounted onto a decorative marble surround to James Banks,
1729, and a further metal plaque to Elizabeth Wightman, 1696.
The north chancel has a monument to Lady Bromley, 1839, by
Nicholson and Wood. In the south aisle is a monument to Sir
George Smith, 1769, the apron being decorated with a shield and
the crown with an urn, that to George Wakefield, 1816 by Jackson
has a shield on the apron. To George Wakefield, 1839, by
Tathams, this is decorated with a shield on the apron and
decorative scrolls on the crown and to Revd. Wakefield, 1798, by
Wallis, this has a shield on the apron and an urn on the crown.
The west window of the south chancel has some C15 stained glass.