The Parish Church of St Peter and St Paul

A Grade I Listed Building in Eckington, Derbyshire 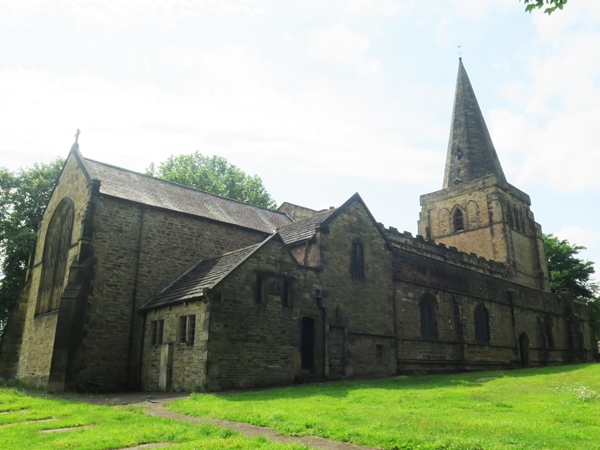 I
Anglican Church. C12 with additions and alterations in C13, C14, C15 and 1763 internal restoration during the C19 and external remodelling together with refurnishings by P.H Currey in 1907. Ashlar and coursed rubble coal measures sandstone, with ashlar dressings, moulded plinths, coped gables, that to the chancel with a cross finial slate and stone slate roof coverings, and a C20 sheet metal covering to the nave. West tower with parapet and octagonal spire, nave, north and south aisles, south aisle porch, chancel with organ chamber and vestry to the north wall.

Five bay nave with restored flat-headed Perp, two-light ogee headed clerestory windows, their heads linked by a stringcourse. Between the windows are attached shafts linked with the string course, which rise to the level of the crenellated ashlar parapet and which formerly supported pinnacles. The hoods to the windows have dropped returns with stops. Three bay chancel restored C19 with two three-light and one single light window with moulded string course forming hoodmould. Priest doorway with C18 quoined surround, flat lintel with projecting keyblock and a nine-panel oak door. C19 diagonal buttresses, with crocketed finals to east end, coped chancel gable with cross finial, and C19 Perp style six-light east window, with panel tracery beneath a four centred arch.

C18 vestry and C19 organ chamber, the former with two-light flush mullioned windows, and with C19 copings, quoined doorway with shallow four centred arch head, and two lancets flanked by a single hoodmould, with a plaque between. Organ chamber with two storey gable, having a blocked doorway. Above lintel, a small slit window, and a two-light cusped window above.

INTERIOR: stepped and chamfered tower arch, beneath a plain hood. Keeled responds to arch with plainly moulded square capitals, and keeled fillets to corners of outer arch support. Five bay nave with C12 arcades, the two eastern piers to each arcade circular, and early C12, the western piers octagonal, and late C12. The responds to the north aisle and the eastern north aisle pier have scalloped decoration to their capitals, the remaining columns have simple hollow-moulded capitals. Stepped and chamfered late C12 pointed chancel arch, with keeled responds and fillets, but with foliage capitals. The south side of the chancel arch has the blocked approach to the former rood loft stair, and a rood loft doorway above. The north side of the chancel arch has a double hagioscope. North aisle chapel to the Guild of the Blessed Virgin found in 1932, served by a three-light Dec window with reticulated tracery, now blocked by the C19 organ chamber. Ogee headed aumbry to aisle north wall. Shallow C19 trussed roof with longitudinal braces to king posts. Chancel walls have C19 plain panelling and a cambered ribbed and panelled C19 roof.

FURNISHINGS: wooden screens to tower and chancel arches 1907, by Currey the latter with a coved canopy and drop tracery. C19 pews and pulpit with open quartrefoil panels below the handrail. C18 organ by John Snelzter of Passan, moved from a now demolished C18 west gallery into the present chancel organ chamber in 1878 with the accompanying mutilation of the C12 keel moulding. Late C17 alter rail with turned and carved balusters and a moulded handrail. Carved wooden reredos, 1908, on a Hoptonwood marble base, incorporating a contemporary copy of Carracci's 'Pieta' given by Sir Sitwell Sitwell to commemorate his wife, Alice. Hatchment above blocked north aisle doorway carries the Royal Coat of Arms. Charity boards to west end aisles.