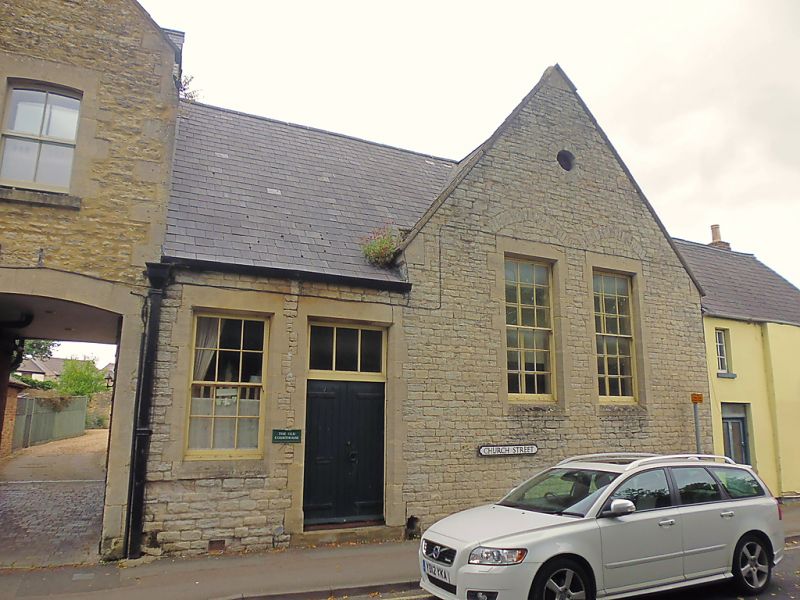 Former police station and courthouse. 1857 on datestone; courthouse probably
later. Coursed squared limestone with ashlar dressings and brick; Welsh-slate
roofs with stone stacks. L-shaped group. 2-storey police station has a 4-window
front, the gabled right bay with a 4-pane segmental-headed sash above a
segmental-arched carriage entrance; other bays have similar but larger sashes to
each floor, and between bays one and 2 is a segmental-arched doorway with
overlight. Doorway and carriage entry retain studded doors. A simple stone
cornice conceals the eaves gutter, and the front gable contains a plaque
inscribed "COUNTY/POLICE/1857". Rear is stone with brick dressings.
Gable-fronted single-storey courthouse, to right, is linked by a short range
containing a large doorway and a window, both in chamfered stone surrounds.
Gabled section contains a pair of tall 18-pane sashes with similar surrounds and
relieving arches, and there is a round opening in the gable. Gable parapet has
gabled kneelers. Long brick-fronted wing to rear of courtroom retains two
20-pane sashes and some other original openings, but is much altered and was
raised to 2 storeys, probably in early C20. Interiors not inspected.
(V.C.H.: Oxfordshire, Vol.VI, p.19).