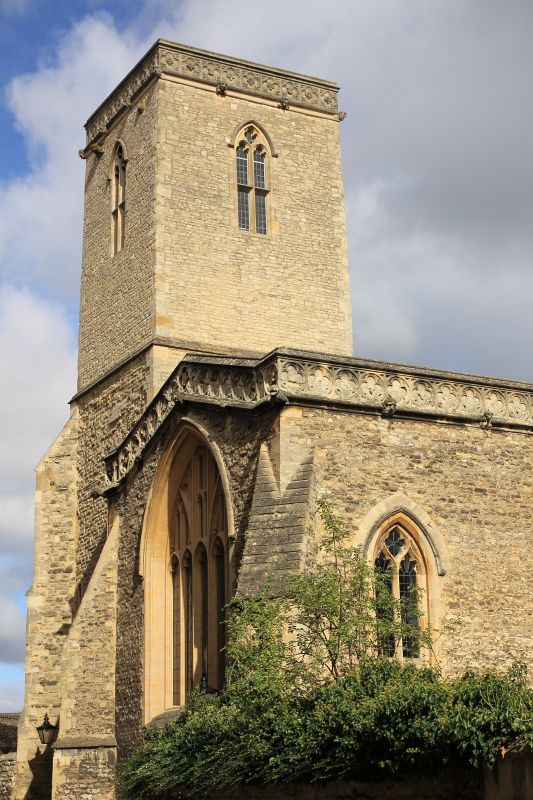 ST EDMUND HALL
1.
1485
Library
(Formerly listed as the Church
of St Peter-in-the-East)
SP 5106 SE 9/387 12.1.54.
I
2.
Crypt, chancel and nave, circa 1140-50. North chapel added and chancel
arch probably widened, circa 1230-40. Mid C13 North aisle and North arcade;
the former rebuilt circa mid C14. Early C14, North-West tower
added and nave extended to West. Chancel and nave walls heightened, possibly
in 1481. Late Cl5 South porch. Early Cl6 vestry and chapel to West of Northchapel.
Church restored by Edward Blore in 1835. Stained glass by Willement, 1839.
In C19 the vaulting ribs of West part of chancel were carved. Other restoration,
circa 1875. Chancel refitted by Sir T G Jackson, 1882. Exterior of Chancel
restored in 1906-7 by A J Rowley of Oxford and the crypt in 1931-2. Fittings
include notable C15 stained glass.
The Church was deconsecrated in 1967 to become the Library of St Edmund Hall.
A complete restoration with a modern interior and some plain glass followed
in 1970/1. The West windows was renewed and the West door blocked. Some
of the fittings are retained, others are in store. (RCHM 38).