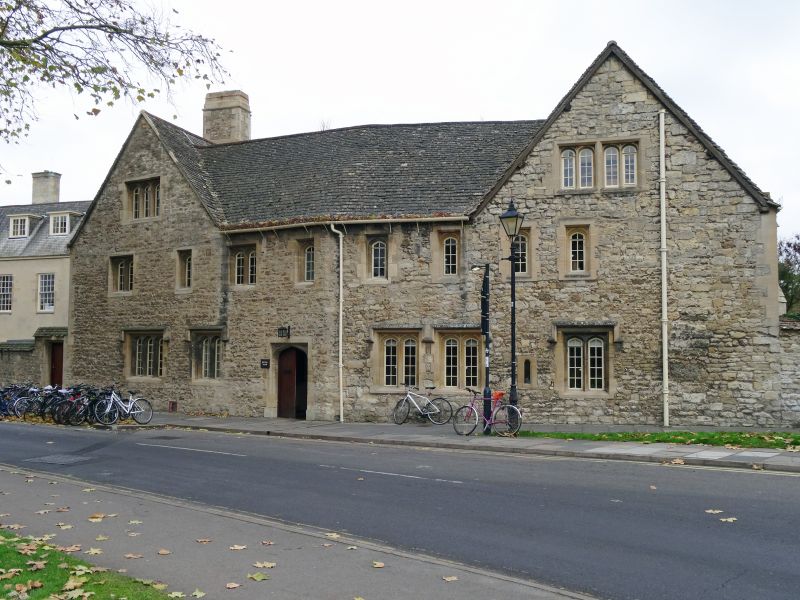 ST CROSS ROAD
1.
1485
(East side)
Holywell Manor
SP 50 NW 24/119 12.1.54.
II
2.
RCHM 252. Now a hostel of Balliol College. The original house was rebuilt
in 1516 by Merton College and parts of this remain but the whole has recently
been reconditioned with considerable additions, 1931. The ancient block
is L shaped in plan with wings to the North and East. On the South side
of the East wing is a gabled projection which functions as a porch and staircase
well. The West elevation on the road is 2-storeyed coursed rubble with
2 gables in each of which are modern 4-light stone mullioned windows. Stone
slate roof and stone stacks. In the 1st floor are 6-single-light stone-framed
windows with 4-centred heads, 3 of which are ancient and in addition there
are 2 2-light similar but modern windows. The ground floor has 2-light similar,
and a 3-light, windows, with square labels, some of which being original.
There is a renewed stone doorframe with a 4-centred head. The South elevation
of the East wing is 2-storeyed coursed rubble with 1st floor 2-and 3-light
stone mullioned windows with 4-centred heads and a stone slate roof. The
windows in the ground floor have renewed stone frames with modern sashes
and there is also here one original but partly renewed, 3-light stone mullioned
window with a square moulded label. The 3-storeyed gabled projection has
angle buttresses, a stone slate roof, an original single-light stone framed
window and some modern wood-framed windows. The North wall of the North
wing has been rebuilt. There are modern additions on the East and North of
the East wing. Interior: RCHM p 183 a. Includes some moulded ceiling beams
in the former hall in the South wing, some original fireplaces, some reset
C17 panelling, and some original roof timbers. History. For an account
of its uses and inhabitants see Proc Oxford Archit Hist Soc V 203-4. For
the history of The Holy Well on the site, see ib 207 and VI, 110-112. For
drawing of 1820 exterior by J C Buckler, see Bodl MS Don A 3 II 72.