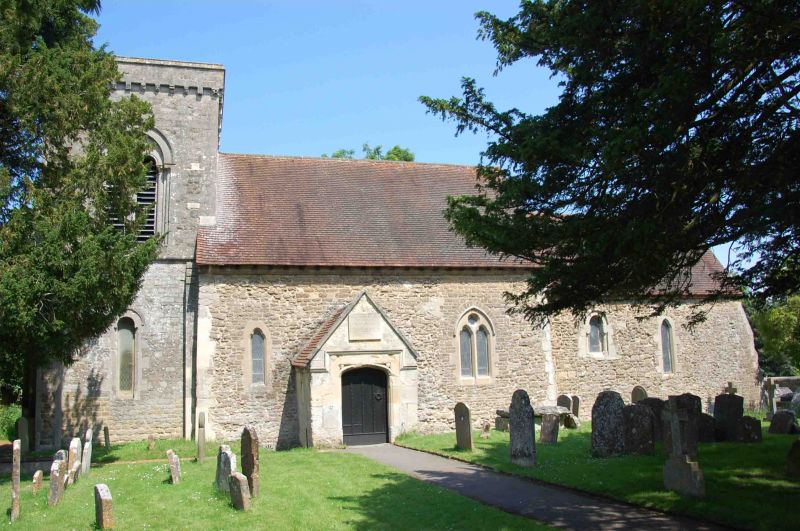 Church. Late C11 and C13, restored and enlarged in C19. Restoration by J.
Derick and others. Limestone rubble with ashlar dressings; plain-tile roof. 2-
bay nave with north aisle, chancel, west tower and south porch, plus vestry to
north of chancel. Chancel has round-headed lancet to north, pointed-trefoil
lancets to east and at east end of south wall, and at west end of south wall a
Romanesque window with exterior shafts with cushion capitals. The eastern part
of the chancel may be a C13 extension. The south wall of the nave is partly Cll
but has C19 windows: 2-light with plate tracery to east of porch, and trefoil-
headed lancet to west. South doorway has early Romanesque round arch with plain
tympanum, and an old double-boarded ribbed door. The ashlar porch is dated 1652
in an inscription tablet in the gable. It has an cuter doorway with ovolo-
moulded surround and a 4-centre arched head with shields in the spandrels. On
the north, the large vestry of 1893 is by H.W.G. Drinkwater, and the north
aisle of 1865 is by J. Brooks who also rebuilt the chancel arch and the nave
roof. Windows are small lancets except west window, a C15 square-headed window
of 2 traceried lights which early C19 views show east of the south porch.
Incorporated in the north wall is the blocked C11 former north door, similar to
the south door but extremely narrow. The 2-stage tower, of c.1840; by Derick,
constructed of squared rubble and ashlar, is in late Romanesque style, and has
flat buttresses, round-headed lights at the lower stage, and belfry openings of
2 lights under a single outer arch. Shafts to jambs and mullions have capitals
with volutes. A carved corbel-table supports a plain parapet. Interior: Mid C19
stained glass in the chancel: the north window of 1856 is probably by
Willement. On the south wall of the chancel is an early C15 alabaster relief of
the Assumption, about 1.5 by 0.6 metres, with traces of paint and gilding.
Under the tower, which forms an extension of the nave, is grouped a
collection of white marble diamond-shaped ledgers, dated from 1683 to 1841,
and 5 late C18 and early C19 wall monuments of plain Classical form. A wall
monument to John Clarke (died 1764) and family has a broken triangular
pediment and flanking fluted pilasters set against palm leaves. On the south
wall is an alabaster monument of c.1661 to Sir William Powell: a latin
inscription on a black tablet has a Baroque surround including Ionic
collonettes supporting a swan-necked pediment holding armorials and flanked by
small obelisks. Graded II* on account of C15 alabaster carving.
(V.C.H. Oxfordshire V, pp.273-4; Buildings of England, Oxfordshire, pp.749-50;
National Monuments Record).