Church of the Assumption of the Blessed Virgin Mary

A Grade I Listed Building in Beckley, Oxfordshire 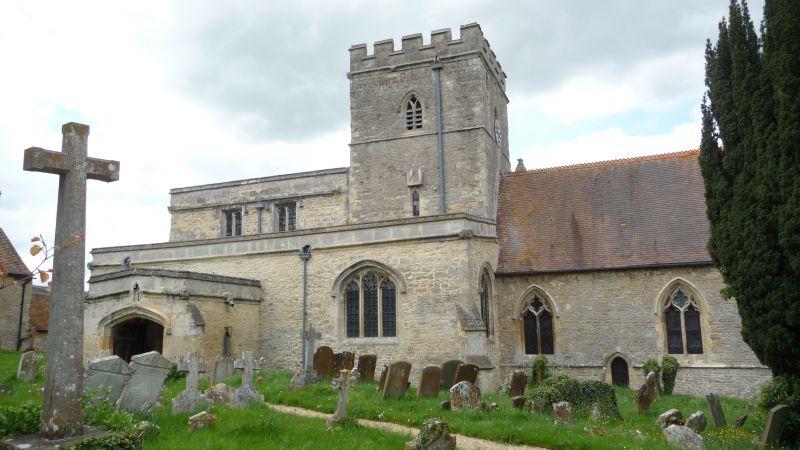 Entry Name: Church of the Assumption of the Blessed Virgin Mary

Church. C14 and C15, restored 1845. Limestone rubble with ashlar dressings;
plain-tile and sheet-metal roofs. Aisled nave, chancel, central tower and south
porch. The C14 chancel has 2-light side windows and a 3-light east window, all
with Reticulated tracery, and a priest's doorway to south with its medieval
door; the steep-pitched roof has a gable parapet. The parapetted south aisle has
similar Decorated windows, to west and west of the porch, but to east and east
of the porch has C15 windows with 3 lights under 4-centred arches. The C15/early
C16 porch has a wide 4-centre arched outer doorway, with ancient double-leaf
doors, beneath a small cusped niche; the parapet string has corner heads and a
gargoyle. The 4-centre arched C15 south doorway has a richly-moulded rectangular
surround with label and has quatrefoils and mouchettes in the spandrels. The
door is C13 and has elaborate hinges, The C15 north aisle has 2-light windows
with Perpendicular tracery, to north and east, and a blocked north doorway. The
nave has square-headed C15 clerestorey windows and a west doorway similar to
that on the south, but retains a late C13 west window of 3 lights with
Intersecting tracery. The crenellated 3-stage central tower, now flanked by the
aisles, shows the roofline of former transepts, and has 2-light arched belfry
openings; at the north-east angle is a 2-stage circular stair turret, with a
short octagonal spirelet, which may be C13 or earlier. Interior: The chancel has
a section of earlier string course on the north wall; its 7-canted medieval roof
has coupled rafters with king posts rising to upper collars, The central tower
has four C14 arches of 2 chamfered orders dying into single-chamfered responds.
The C15 nave has a 2-bay arcade with delicate cruciform piers and a stone missal
desk built into the north-east respond; the contemporary roof has moulded tie
beams, purlins and wallplates and is braced from moulded posts. C13 wall
paintings on the west and south outer wall faces of the tower; C17 paintings on
the tower and the west wall of the nave. C14 and C15 stained-glass panels and
figures in north aisle and in some tracery lights of chancel windows; chancel
north window 1895 by J. Hardman; other C19 glass in chancel, west window of
nave, and east and west windows of south aisle. Fittings include a C12 tub font,
C15 bench pews in and aisles, a C17 pulpit with arched panels and tester, a
medieval chest, and a C17 bier in the porch. Wall monument in chancel to Anne
Croke (died 1609) has a brass engraving and inscription in a Classical stone
frame beneath an achievement; several plain C18 wall tablets in aisles; early
C19 lozenge-shaped floor slabs to members of the Croke family of Studley Priory,
(V.C.H.: Oxfordshire, Vol.V; Buildings of England: Oxfordshire, pp. 447-8).