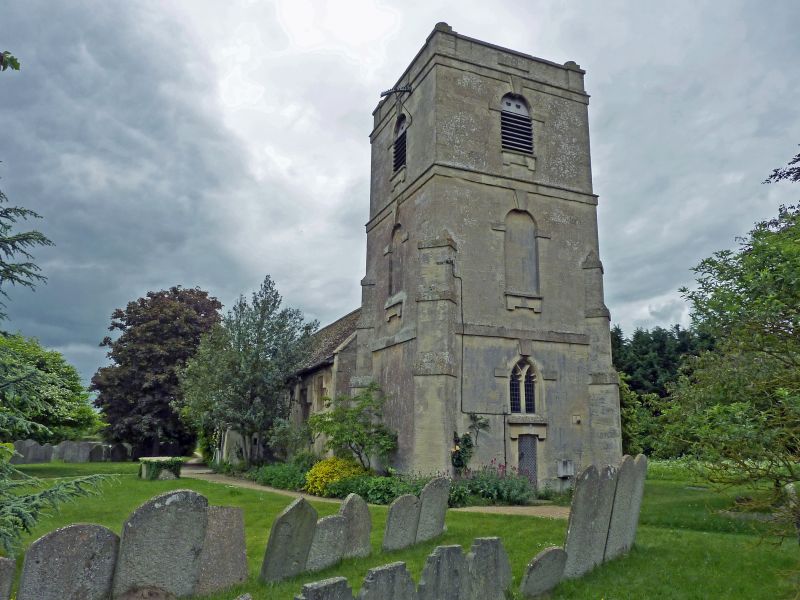 2.
C13 refenestrated in the C15, given a W tower in 1722 and restored in 1897. 5 Bay
nave, 2 bay chancel, W tower, N vestry and N porch. Rubble stone and roughcast to the
nave, rubble stone to the chancel and finely jointed ashlar to the tower. Dressed
stone quoins and copings with gabled stone tiled roofs. The gable ends have Victorian
cross finials, 3 storey classical style W tower with diagonal buttresses and
pyramidal set-offs that reach to the mid point of the second storey. There are blind
and keyed round arched openings to the 2nd storey and similar openings to the bell
stage with wooden louvres. The whole is divided by plain string courses but falters
in its proportions at the plain parapet. This is due to the disappearance of four
stone corner urns. The N door has a flat entablature,wafer thin like the rest of the
tower detailing, and the door itself is of studded planks. Above this a late C19
2 light window has been inserted into a classical opening. The S wall of the nave has
one flat-headed 2 light Perpendicular window, 2 C19 Perp style windows under pointed
heads and one C19 3 light window a flat head. All these have dripstones. The N
wall of the nave has 1 small Perp cusped lancet under a flat head another 2 light Perp
window under a pointed head, a large Perp window of panelled lights and 2 renewed Perp
2 light windows under flat heads. The chancel S wall has 2 Perp windows, one with
4 cusped lights with a quatrefoil above under a flat head with a dripstone and one of
3 lights under a flat head. The N wall has a plain lancet C19 Decorated E window of
2 lights. The vestry has a 2 cusped light window under a flat head. The N porch is
timber faced with a carved bargeboard and a plank door. The N doorway is C13 with a
moulded trefoiled head supported on slim colonettes and stiff leaf capitals.
Aiseless interior with open rafter roofs, that to the nave with 5 heavy tie beams from
which spring crown posts. The tower arch is classical with a keystone and square
abaci, that to the N is inscribed with the date 1722. C13 Chancel arch on plain
imposts has the remains of the rood stairs behind its N jamb. There is also a C13 -
trefoiled piscina in the chancel S wall.
A plain Greek Revival mural tablet on the S wall of the nave commemorates Elizabeth
Hughes, died 1787 and her sister Mary Ann, died 1805 and is signed Westmacott.
The nave windows are filled with badly fired mid-Victorian stained glass that was
brought from Newbury parish church in about 1935.
The polygonal pulpit is a fine piece of Jacobean woodwork with much strapwork and
arcading, the altar table is also Jacobean of plain design and a 6 foot high painted
Royal Arms of 1733 lies beside the tower arch.