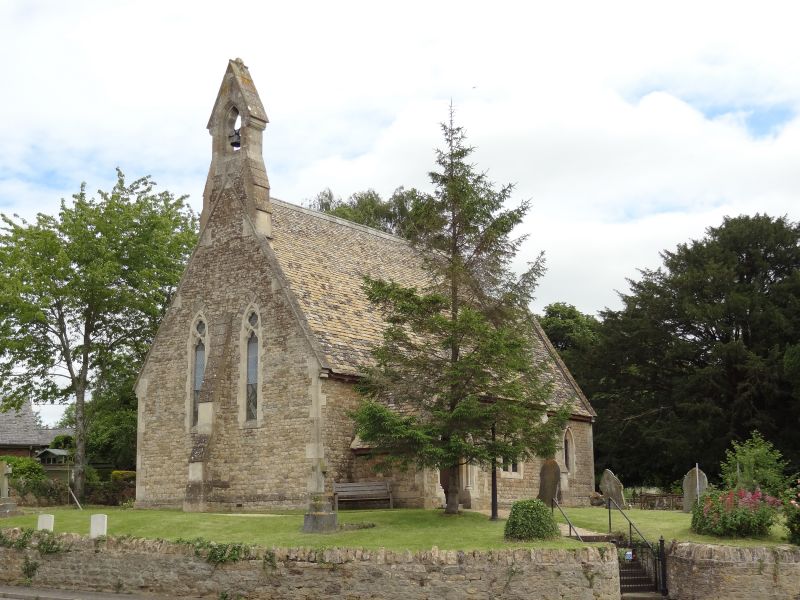 2.
1861 by J H Hugall as recorded by Goodhart-Rendel. Squared and coursed rubble stone,
dressed stone quoins and copings with gabled stone tiled roofs. 3 bay nave, 2 bay
chancel, single w bellcote, S porch and N vestry. Early English details of 2 light
cusped windows with roundels above under pointed arches to the nave and plain cusped
lancets to the chancel. E window of 3 cusped lancets with quatrefoil and trefoils
above under pointed arch enclosed by a dripstone with uncut capitals. W front has
2 cusped lancets with quatrefoils above either side of a stepped buttress. S porch
with outer arch moulded and ending in tightly foliated capitals and inner of a single
moulded arch with uncut capitals.
Aisleless interior with open rafter roofs and a plainly moulded chancel arch on half
shafts with tightly foliated capitals.
1867 stained glassE window by Wailes and further stained glass in chancel S window
and nave S windows. Stone pulpit with coloured marble insets and octagonal font on
oloured marble piers both contemporary with the church.
St John's stands on an elevated site overlooking the village centre.