A Grade I Listed Building in Rollright, Oxfordshire 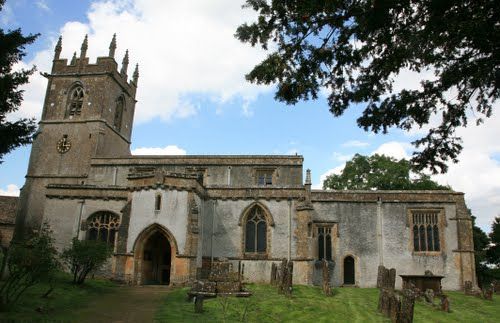 Chancel is probably C13 and has shallow ashlar buttresses at the angles, but has a plain C15 parapet and C15 windows: to east a four-centre-arched three-light window with elaborate drop tracery, and to south square-headed windows of two and four lights with similar tracery, labels and head stops, plus a C15 priest's door. Narrow south aisle has elaborate C14 details including a pinnacled diagonal buttress with ogee-canopied image niche, a corbel table of grotesque heads and square flowers, returning around the contemporary porch, a two-light window to right of the porch with flowing tracery and square flowers around the arch, and an unusual three-light window to left of the porch with a segmental arch, dense drop tracery, and elaborate headstops, one holding an oak branch.

Two storey porch has an outer arch of two chamfered orders below an ogee lancet, and has a sundial on the gable plus eroded corner pinnacles; it shelters a fine late C12 doorway of two orders (beakhead and chevron) with an outer band of chevron, an elaborate carved tympanum, and detached jamb shafts with scalloped capitals. C15 clerestory has two-light square-headed windows with labels. North side of nave is C15 and has a high moulded ashlar plinth and stepped buttresses.

Ashlar tower of three stages, with a similar plinth, diagonal buttresses, and a crenellated parapet with eight crocketed pinnacles, is also C15 and has a three-light drop-traceried west window, deeply recessed in a four-centre-arched casement mould, and has two-light Y-traceried transomed openings to the bell chamber; below the parapet are eight large winged gargoyles.

Interior: chancel has a small canopied piscina with credence shelf and some original colouring, set into the splay of a C15 window; shallow kingpost roof is probably early C19 but has small pendants of C17 character. C13 chancel arch of three chamfered orders has attached shafts with moulded capitals and bases; three bay nave arcade of two orders is probably contemporary and has circular columns with similar mouldings; tall tower arch of three continuous chamfered orders is C15. South aisle has an ogee-headed C14 piscina with credence shelf. C15 north door has re-used C12 chevron in the rere arch. Nave roof, with curved braces rising from wall posts to tiebeams, is dated 1814 but may be much earlier; south aisle roof is mid C19.

Fittings include a panelled octagonal C15 font, a richly-carved traceried C15 wood screen (repainted 1862), and a contemporary canopy fixed to the nave roof with a panelled cove and carved bosses, which may have original colouring, Pews, pulpit and other fittings are mostly C19. Coloured glass is mainly C19 in repetitive patterns, but includes five C15 roundels in a south aisle window. Brass of James Battersby (d.1522).