A Grade I Listed Building in Charlbury, Oxfordshire 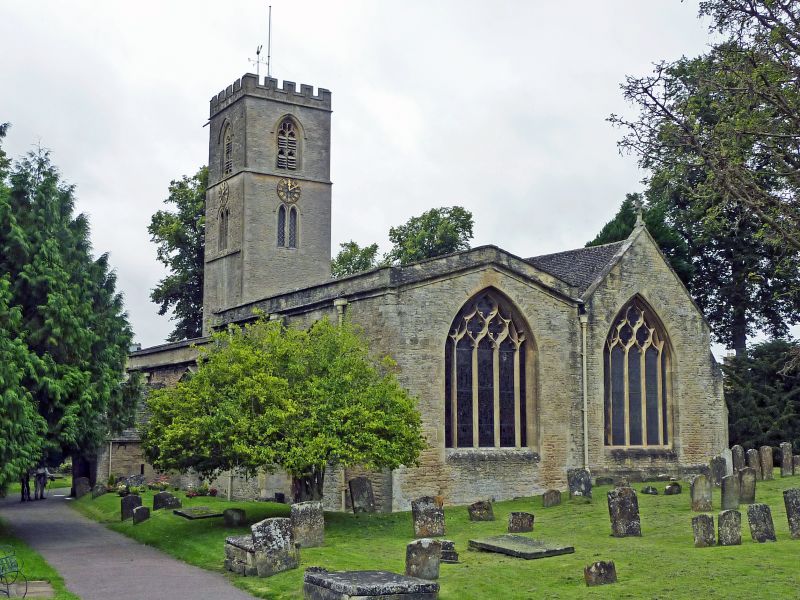 C13 chancel retains a restored lancet to north, but the five-light east window has Decorated tracery. Transeptal north chapel has a two-light C13 north window with a shafted mullion and a concave-sided lozenge in the head (cf. St Matthew, Langford); buttresses, parapet and segmental-headed east window are C15/C16. South chapel, 'The Pudlicote Aisle', is equal in size to the chancel which it post-dates, and has a similar C14-style east window (restored c.1875). Tudor-arched south windows, of two wide lights with plain tracery, are similar to those in the south aisle; though claimed to be the result of an C18 simplification (VCH and Pevsner), the windows look intact and may be C16.

A buttress on the south chapel has a painted sundial dated 1776. South porch may also be C16 and has a Tudor-arched doorway with an ancient panelled door; it shelters the fine trefoil-headed C13 south doorway with matching roll-moulded arch rising from shafted jambs. North aisle retains a lancet to west, but was widened (probably C15) and has two four-centre-arched windows to north with casement mouldings and altered tracery. Nave clerestory has plain mullioned windows to south, but to north has two windows with cinquefoil heads.

Unbuttressed tower is C13 in the three lower stages (stages two and three have no dividing string), but has a crenellated C15 bell-chamber stage with traceried openings; earlier bell chamber has paired roll-moulded lancets, and there are small lancets at stage two and a very tall lancet above the Tudor-arched C15/C16 west doorway.

Interior: chancel has a C15/earlyC16 arch-braced collar-truss roof with two rows of windbracing. Two bay arcade to Pudlicote Aisle is C14 (restored/rebuilt C19), but C13 arch to north chapel survives, as do similar arches opening from both nave aisles indicating that a matching transeptal chapel formerly existed to south and that both aisles were narrower. All three arches have stiff-leaf capitals but have lost their shafts. The fine trefoil-headed piscina with stone shelf, now near the east end of the Pudlicote Aisle, may have been re-used from the former transept. North chapel has a richly-moulded C15 roof. Chancel arch (probably mostly C19) rises from moulded corbels. Three bay south nave arcade, of two chamfered orders on circular columns, is C13 and probably almost contemporary with tall tower arch which, however, has altered responds.

C12 north arcade, with plain round arches, has scalloped capitals and circular columns in the two westernmost bays, but the eastern bay, which could be slightly earlier, has square masonry piers and may mark the site of transepts in the C12 church. South aisle has a C15/C16 roof rising from fine corbel heads; north aisle roof is probably a C19 copy. Tower contains a wooden spiral stair of c.1700 with turned balusters.