A Grade I Listed Building in Burford, Oxfordshire 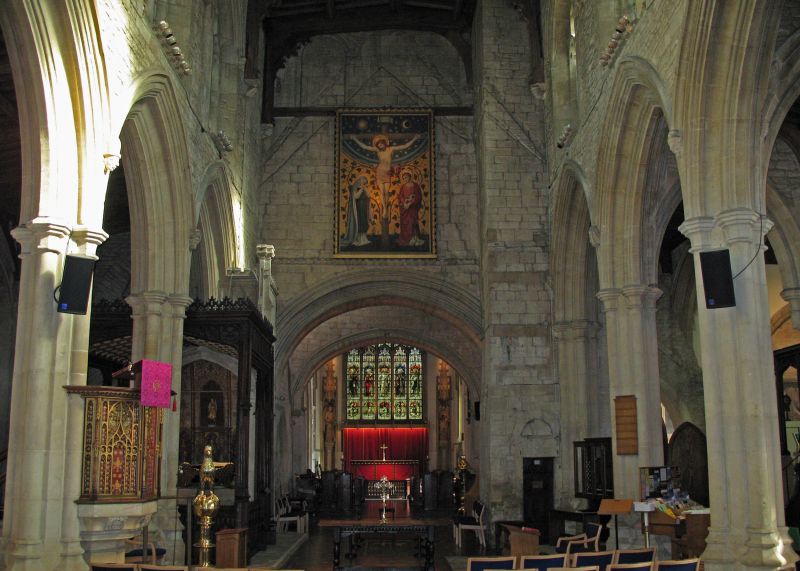 GV
I
Anglican Parish Church. C12 (? earlier origins) developed to present
complex plan by late C15. Heavily restored by Street in 1870s, one of the
cases which led to William Morris's founding of the SPAB. Coursed rubble
and ashlar too (especially tower and Gild Chapel), lead and copper roofs
concealed by parapets large Cotswold wool church; roughly cruciform in
plan with central tower and spire. Five bay aisled and clerestoried nave, N.
and S chapels, three storey S porch and the Gild chapel to SW. Outside
first. Of the C12 the mighty crossing tower and the mid-C12 door at West
end with its typical inner order of beak-heads and outer order or chevron,
see also chevron window surrounds to tower. Otherwise largely
Perpendicular in appearance; the clerestory, the heightening of the tower
and addition of spire envisaged by 1396. The S. porch is magnificent with
its elegant tracery-panelled facade, crocketed finial and canopy work; three
large figures with C19 heads. The Gild Chapel, started in the early C13,
extended to the West and was incorporated with the church (having been
previously separate) in the C15, when it was reduced from the West; Early
English S. door with defaced Rood over. Through the fan-vaulted porch to
the interior. Low C12 crossing arches, partly blocked to N. and S. to
support added weight of tower and spire: the C12 billet mould and roof-
lines can be traced, they continue across the stair-turret at S.W. Corner
which partly masks the W.crossing arch - the tympanum of its doorway
matches the design of the adjacent caps so the irregularity was presumably
an error in design and not an accident of history. Tall arches with C15
label-heads with amusing hats. C15 tie-beam roof. Weird caps to arcades
opening into non-parallel Gild Chapel (empiric solutions). Between the S.
transept and the porch, the Chapel of St Thomas of Canterbury raised on a
crypt; some wall-paintings survive. At the E. end of the N. arcade a
chantry with (restored) polychrome wooden screens and stone canopy over
altar (now the Chapel of St Peter, restored by Street in 1873). The S.
transept and S. chapel, unusually, retain their clutter of tomb-chests, a
large one in the S. transept with colour and shield-bearing angels under
crocketed canopies. Wide many-cusped relieving arch on E. wall of S.
transept. Magnificent Tanfield monument in N. chapel 1628 with cadavers
below and a wrought-iron palisade. Very numerous fittings: excellent
font with Rood, Perpendicular pulpit (restored 1870), medieval glass in
W. and E. windows' tracery lights, Hardman E. window, much Kempe glass and
a lot of memorials. The best known of these are to Christoper Kempster
(died 1715, a local quarry-man and favourite of Wren, who used him at St
Paul's), and the c.1569 Harman memorial on N. wall with its Gill-like Red
Indians in relief on the N. wall. In the Gild Chapel the S. wall is lined
with roughly similar pedimented tomb-chests mostly to the Sylvester
family; a similar chest in S. choir aisle.