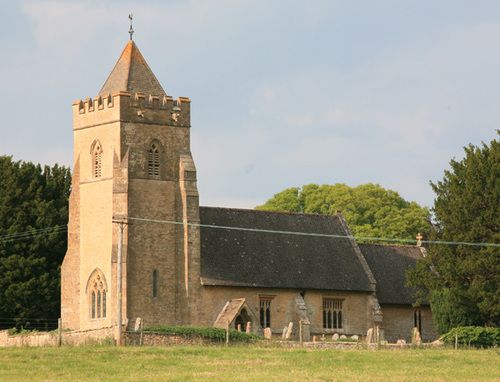 Tower: rebuilt by Street in two unequal stages with stepped chamfered plinth and diagonal buttresses. Embattled parapet with two reused medieval gargoyles on both north and south sides; pyramidal roof with brass weathercock. Projecting staircase turret to north east corner is lit by narrow chamfered rectangular windows and a tiny reused trefoil-headed window to bottom. Belfry has reused C14 two-light trefoil-headed windows with quatrefoils to apexes and hoodmoulds on all sides, that to east cut by C20 clock. C19 lancet to first stage on south and narrow lancet high up to first stage on north. Reused C14 window with reticulated tracery in three lights to first stage on west.

Late C19 stained glass in four-light Perpendicular window and in east window. Monuments: One C18 and several C19 wall tablets and memorials in chancel and two rustic wall memorials to members of Bolter family on north wall of aisle. These are dated 1640 and 1694 and have square moulded inscription panels with carved segmental canopies to top.

In 1848 the church was described as almost entirely Romanesque by the antiquarian J.H. Parker but this is not confirmed by a Buckler drawing of 1821, which shows it to be mostly Perpendicular in external appearance. The earthworks in the field to the west (Scheduled Ancient Monument) are said to be associated with a former (?) manor house and its garden.