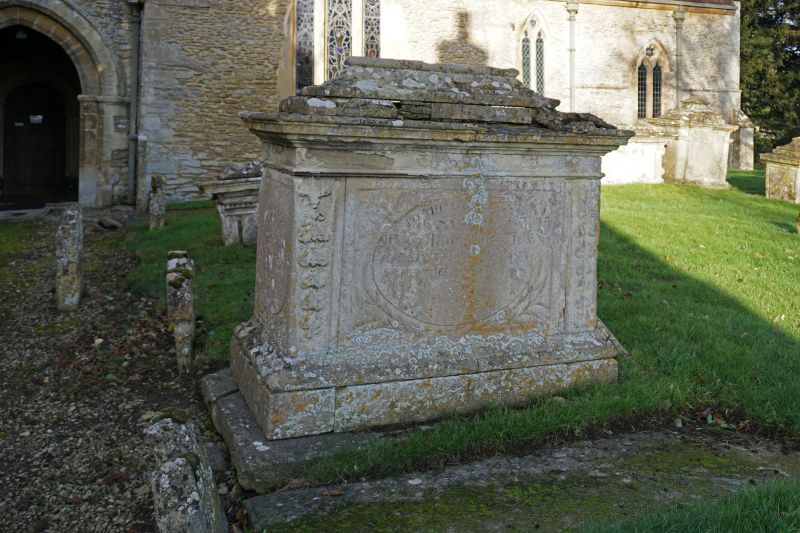 GV II
Group of 3 chest tombs and 2 headstones, all of limestone. Chest tombs are as
follows: 1) late C17, dated 16?6, with illegible inscriptions. Moulded panels,
flanked by pilasters on longer sides; coved cornice lid with moulded string and
guttae over pilasters; coved top. 2) to Thomas ? of Filkins 1811, with later
inscriptions to Robert Burdock 1851 and to John Burdock. Plain slab sides with
ovolo-moulded cornice lid. 3) to Purbrick family, with inscriptions to Elizabeth
1795, Sarah 1796, Robert 1800, William 1828, and Mary 1849. Chest has moulded
base, cornice lid and top, and oval inscription panels with shallow relief
carvings of cherub heads and wheat ears in spandrels. Long sides have flanking
pilaster strips with carved foliage festoons. Flanking South end of Purbrick
tomb are a pair of headstones, one to Anne Purbrick 1689, the other to John
Burdock 1685. The former has shaped and moulded inscription panel rising to a
carved cherub head flanked by feathered scrolls. The latter has carved top with
winged cherub head. Another late C17 headstone with illegible inscription to
Elizabeth ? stands adjacent to north-east end of chest tomb No.2 above. This
also has feathered scrolls flanking a carved cherub head.