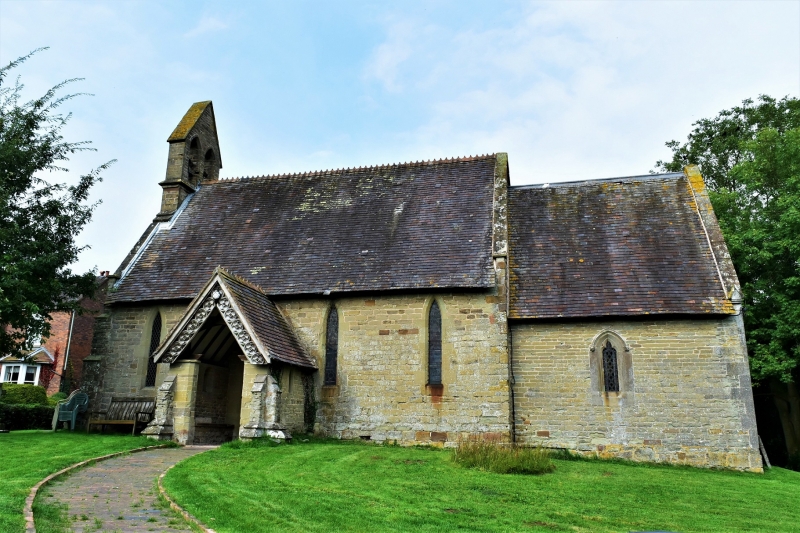 II
Parish church of 1845-46 with contemporary glass by David Evans and William Wailes.

EXTERIOR: A simple Early-English style parish church with three lancets in the nave south and north walls and large lancet with hood mould in the west wall, which has clasping buttresses. The south doorway, and a blocked or blind north doorway, both have continuous chamfer. The south door is studded and has strap hinges. The porch has prominent barge boards with blind quatrefoils. The gabled bellcote has two bells in lancet openings. Chancel windows are cusped and have hood moulds with head stops: single-light windows are in the south and north walls, and the two-light east window has Y-tracery.

INTERIOR: The nave has a four-bay, the chancel a two-bay, collar-beam roof with small arched braces. The narrow chancel arch has an outer continuous chamfer and inner order on round responds with moulded capitals. Walls are plastered, but the nave is ashlar below a string course. Nave and chancel have red and black floor tiles, where visible under the carpet, and sanctuary tiles incorporate Agnus Dei and Evangelists in lozenges.

PRINCIPAL FIXTURES: The font is elaborate imitation Norman. The base has chevron and cable mouldings, the round stem twisted roll mouldings below another cable moulding, and four main figurative scenes in semi-circular frames surround the basin. The pulpit is Elizabethan in style, polygonal with Tudor-Gothic panelling. Pews of 1847 have plain ends with moulded edges. The choir stalls have plain ends with finials. The arcaded wooden communion rail is probably also 1847. Chancel windows are by David Evans, of patterns with foliage and including in the east window scenes of Christ carrying the cross and the Ascension. The strikingly colourful west window, by William Wailes, dated 1845, shows St John the Baptist. Three other nave windows have pale colours, and are attributed to Burlison & Grylls: Dorcas and Good Shepherd (both post 1918) and Christ blessing children (post 1930).

HISTORY: Built in 1845-46 at the expense of Dr Thomas Rowley, headmaster of Bridgnorth Grammar School.

REASONS FOR DESIGNATION: The church of St John the Baptist, Middleton Scriven, is designated at Grade II for the following principal reasons:
* It is a well-preserved mid C19 Gothic-revival church that has been altered little since that time.
* It contains fixtures and fittings of interest, including good-quality glass by William Wailes and an elaborate Norman-style font.