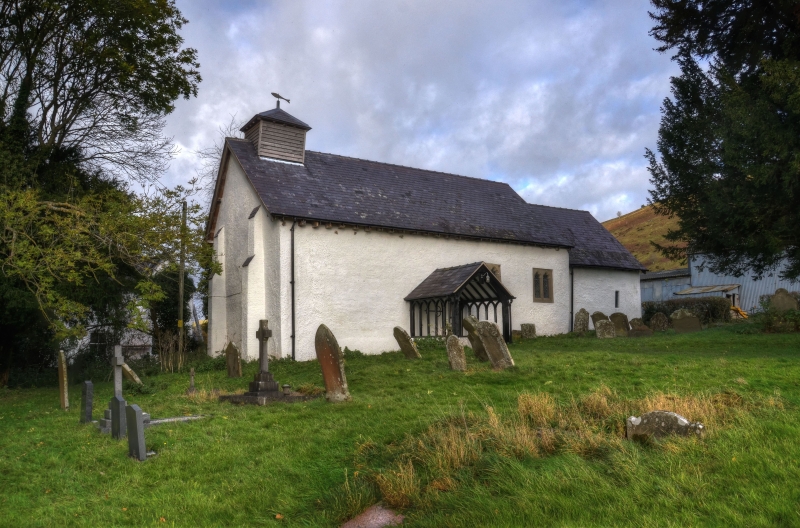 Parish church. C12 or earlier origins, restored 1859. Uncoursed rubble,
roughcast and whitewashed, slate roofs. Nave with small belfry at west end,
chancel and south porch. Nave. Buttressed west wall with a narrow rectangular
slit opening; on the south side two 2-light square-headed cusped windows (C15?),
that to west totally renewed, on the north one similar single-light window;
single chamfered pointed south doorway (c.1300) under a C19 openwork timber
porch of 5 pointed arches, the 2 principal uprights of which, with their
spirited but shallow leaf carving, may be re-used from an earlier structure;
at the west end a repaired C19 weatherboarded belfry with pyramidal cap and
C20 fish-shaped weathervane. Chancel. The south window, of indeterminate
date, is rectangular externally, but inside is splayed under a wide segmental
head; the East window of 1859 has paired lancets with a spherical head, 2
brick buttresses (now roughcast) to the north wall. Interior, The thickness
of the walls is indicated by the deep splays on all the windows; trussed
rafter roof to the nave, of which the wallposts and all but one of the tie
beams (at the west end) have been removed; possibly C15 chancel roof has
one truss with a slightly cambered tie beam and collar and one with a collar
only, windbraces; the remains of a C12 string course at the east end of the
nave (on the north side) is cut by a plastered partition between nave and
chancel in which is an inserted mid C19 screen; well-like sedile in the splay
of the south chancel window is of uncertain date but is probably medieval;
much repaired late C17 altar rails with bulbous posts and heavy turned balusters;
the communion table is contemporary or perhaps a little earlier and at the
west end the screen (again with turned balusters and carved decoration similar
to those on the altar rails) is made up from parts of a C17 family pew; pulpit,
benches and stained glass in East window all 1859; the tub-shaped font rests
on a projecting octagonal slab below which is a base consisting of 2 pieces
of stone, the lower of which has large terminating ornaments on the diagonal
faces; the bowl itself is probably C12 but the base is more likely to be
C14; on the north wall of the nave are fragments of medieval painting, said
to be part of a consecration cross uncovered in 1964. Cranage, Vol.5 Pp. 418-19.