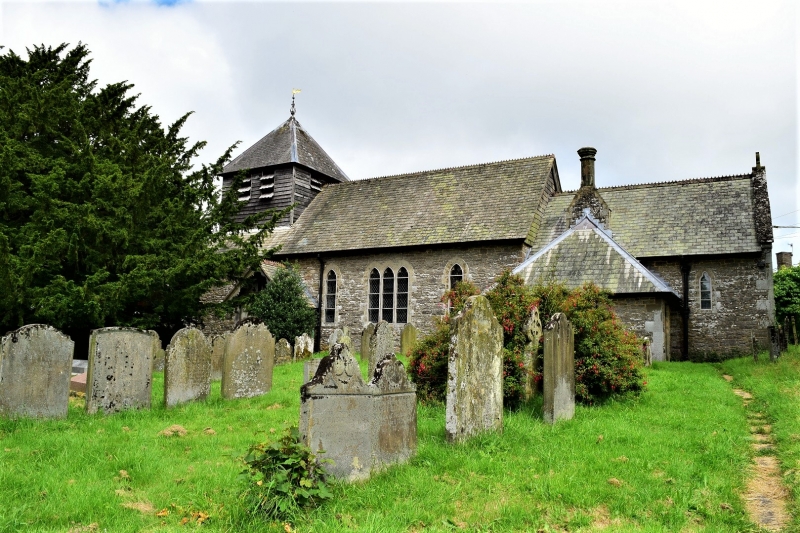 Parish church. Medieval origins, largely rebuilt using old materials
by Henry Curzon in 1886. Rubblestone walls, slate roofs. Nave, chancel,
south porch and vestry. Nave. The majority of the north wall, the west
wall and the western part of the south wall appear to be medieval (see
the angle quoins - one of those at the north-west corner is carved with
an inverted grotesque head); on the north side are a small late C12 window
(deeply splayed internally) and to the west a blocked round headed doorway
- carved imposts, one with saltire crosses, the other with plain horizontal
fluting - both in their original positions. The south doorway (under
a late C19 timber porch on low stone walls) is transitional (c.1200),
pointed with single chamfering and hoodmould, again in its original position;
at the west end the weatherboarded belfry with pyramidal roof and weather-
cock was considerably altered in late C19, it is supported on its west
side by a stone corbel table; the cusped lancet windows, 3 on the south
side (the central one with triple lights) and one on the north are also
of 1886. Chancel. 2 bays, 2 cusped lancets in the western bay on each
side, eastern bay windowless, has an East window of triple lancets; the
vestry, unusually, is on the south side. Interior. The belfry is supported
by an old framework of 4 oak pillars with massive cross beams, strengthened
by braces; the 5-bay arch braced roof to the nave may be late C15; one
of its trusses also has a tie beam but the windbraces, which are said
to be arranged in a quatrefoil pattern, are now plastered over; the chancel,
separated from the nave by a late C19 openwork timber screen has a trussed
rafter roof (1886); C17 carved wooden pulpit and communion table, late
C19 reredos with mosaic panels in an alabaster surround; the stained
glass in the East window, showing Christ's coronation, is by Clayton
and Bell; late C19 font. Cl7 and C18 pews re-used as dado panelling
to the nave. Early C18 3-panel parish chest. At the west end of the
church are placed 5 C18 and C19 headstones. The advowson of the church
was presented to the Abbey of Shrewsbury as early as 1095. B.O.E. p.311;
Cranage Vol.5 Pp. 427-8.