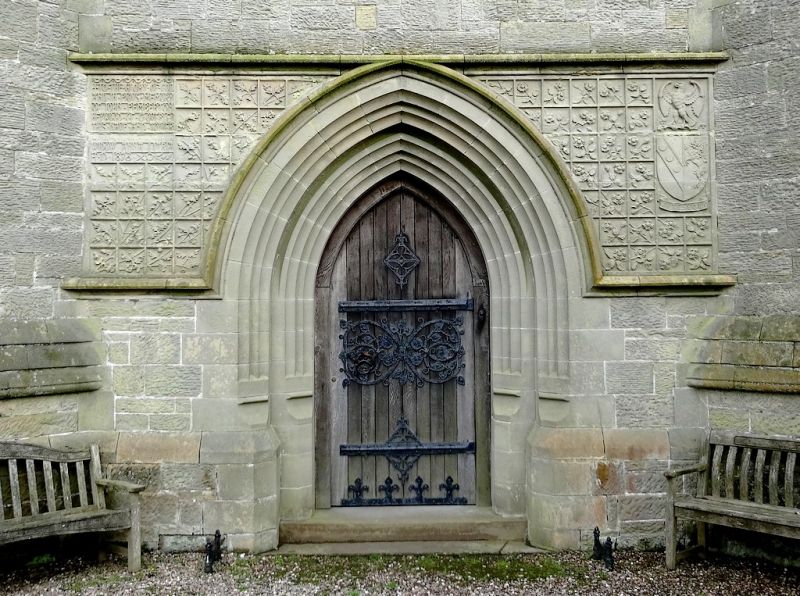 A parish church of 1872 and 1878, principally designed by William Eden Nesfield, including some earlier material.

PLAN: the building is angled towards the street and the ritual west end is actually south-west. Ritual compass points are used throughout this description. Nave with northern aisle, north-east side chapel and a north-western tower which includes a porch at its base, transepts and chancel. The building adjoins the earlier almshouses and former schoolhouse, Nos. 1-6 Church Terrace (Grade II) at the western end of its southern flank. The work of 1872 and 1878 is, respectively, in a Decorated and Perpendicular Gothic style.

THE CHANCEL, VESTRY & TRANSEPTS: were built in 1872. The chancel has a three-light, eastern window with cusped tracery and a quatrefoil to the apex, flanked by buttresses with offsets. Lateral chancel windows are of two lights to the south, with an encircled trefoil to the apex, and three lights on the northern face with reticulated tracery. The projecting gabled vestry on the south side has two, three-light windows with square heads, a priest's door to the east side and a stone chimney at the south-western corner. The south transept is a shallow projection with a two-light window with Decorated tracery. The northern transept is deeper and is combined with a north-eastern side chapel with paired gables and a two-light and three-light window. A door in the lower walling of the transept has a lintel which is engraved 'A.M.H. 1872.'.

THE NAVE: of 1878 has rectilinear tracery to its windows and a crenellated parapet. String courses below the parapets of the nave and aisle both have large-scale bosses and rainwater spouts, with gargoyle heads at the upper level. The chimneystack of the northernmost almshouse is incorporated as part of the nave parapet on the southern side. The western end has a wide window of seven lights with a prominent hood mould with large end stops in the form of dragons. At the gable apex is an angel corbel supporting a sceptre finial and there is a large gargoyle spout to the south-west corner above a substantial diagonal buttress.

THE TOWER: at the western end of the northern flank and built in 1878, is of three stages, marked by small, traceried windows of two lights on the western face. The other faces are blank to their lower body, save for the north face, which has a portal with pointed arch which is flanked by the two spandrels of the arch by a carved trellis supporting oak leaves and acorns at left and roses at right in high relief. To the left is an inscription which reads: '+TO.THE.GLORY.OF.GOD / AND.IN.PIOUS.MEMORY / OF.JOHN.PEMBERTON / HEYWOOD.OF.CLOVERLEY / THIS.NAVE.AND.TOWER / WERE.ERECTED.BY.HIS / WIDOW.ANNA.MARIA / A.D.1878.' At right is a coat of arms and the motto 'ALTE.VOLO'. The tower has diagonal buttresses with offsets to its northern corners, a polygonal turret to the south-western corner and an angle buttress which connects to the parapet of the nave at its south-eastern corner. The top stage of the tower has pairs of two-light, louvered openings to three sides and a single, similar light to the west. The string course below the battlemented parapet has prominent, diagonal gargoyle spouts at the corners. Rainwater goods across the church are largely original with moulded drain hoppers decorated with circular 'pies' and other motifs.

INTERIOR: is of some complexity and encompasses a number of notable features in its relatively small ambit. Windows and arches have internal hood moulds with richly-carved and boldly-scaled end stops which may be the work of James Forsyth, who had worked for the same architect and patron at Cloverley a couple of years before. The nave is panelled to its lower walling. The shallow-pitched nave roof is supported by wall posts which rise from corbels at the height of the moulded clerestory window sill. Arched brackets connect to the cranked tie beams which have brattished tops and support panels of wooden tracery. Angel bosses at the centre of each tie have outstretched wings. The lean-to timber roof of the northern side aisle is simpler and also springs from wall posts. The roof of the north transept is panelled and the chancel has a scissor beam construction with ashlar posts.
The nave is of three bays with two clerestory windows on the north side and one to the south. The arcade of two bays connecting with the north aisle has simple cavetto and roll mouldings which do not conflict with the chamfered mouldings of the earlier chancel and transept arches.
The tower has a porch at ground level, and a stone vault with hollow-chamfered ribs and carved bosses around a central, boarded oculus.
Flooring is of plain and patterned encaustic tiles in the chancel and wood block flooring to the nave.

FURNITURE: much of the fittings were designed by Nesfield, including the ironwork; choir stalls; altar rail; side screen; an elaborate organ case with painted pipes and panels of 'Spanish' leather; the pulpit with inlaid panels of marble and carving and cupboards in the vestry. Carved and painted 'pies', a characteristic motif of Nesfield's deriving ultimately from Japanese ornament, are used to decorate interior surfaces including window sills, the sedilia and piscina backs and around the pulpit and the organ pipes. The walling behind the altar was originally decorated with polychromatic tiles showing flowers and foliage in relief. This was replaced in 1944 by oak panels with tracery tops.
Five monuments, four of which are to members of the Dod family, were repositioned from the old church. The war memorial is a wooden board with panels of blind tracery divided by miniature statues of servicemen, with St George at the centre. A tester projects from the top.

GLASS: the church contains a notable collection of late-C19 windows, made in commemoration of members of the Heywood family. The western nave window, showing the Ascension, is by Hardman's and was installed in 1879. The chancel east window of 1879, showing Christ in Majesty is by Clayton & Bell. Both of the windows in the Lady Chapel are by Hardman and date from 1879 and 1880. The Northern chancel window of 1888 is by Powell, to a design of Henry Holiday. Powell also made the south transept window of 1898, designed by Harrington Mann. The south chancel window is by Burne Jones and Morris c.1875.

A chapel of ease was built at Calverhall, circa 1726, as part of a complex of alms houses with a school room and master's house attached. The three brick ranges formed an open square in a near-symmetrical arrangement, with the chapel placed at the northern end and projecting as a gabled wing, matched by the school at the southern end. The alms houses, with their central gable, and the former school survive (Nos. 1-6 Church Terrace) and are statutorily listed (Grade II).

The chapel was rebuilt, either wholly or in part in 1843 under the patronage of John Whitehall Dod of Cloverley Hall, and was described circa 1851 (see SOURCES, Bagshaw) as being of freestone, apparently with an elaborate altarpiece and stained glass windows. This new chapel appears from the evidence of a plan, attached to a post-facto faculty dated 1874, to have extended to the full length of the present building. In 1872 a new chancel was built with north and south transepts and a southern vestry. This was to the designs of William Eden Nesfield and the patron was Anna Maria Heywood, the wife of John Pemberton Heywood, a Liverpool banker who had bought the Cloverley Estate from the Dod family in 1864. It seems likely from the 1874 plan that this was a thorough reworking in a Decorated Gothic style of the existing eastern end of the chapel and may date in part from 1843. A further campaign of building followed in 1878, again designed by Nesfield, but this time in a Perpendicular style. The Ordnance Survey map published in 1880 appears to show a similar footprint, with the exception of the tower, and it may be that earlier foundations and parts of the structure were re-used. This rebuilding of the nave with a northern aisle and the construction of the north-western tower was also done under the patronage of Anna Maria Heywood, following the death of her husband. Five wall monuments from the earlier church were transferred to the new building. The pews in the nave appear to pre-date 1878. A wooden war memorial on the southern wall of the nave was fitted c.1920, together with the dado panelling on that wall. Similar dado panelling on the north and west walls followed in 1934. The chancel was re-ordered in 1944 when the original tiling of the eastern wall and carved reredos, of Nesfield's design, were replaced by wooden panelling. The lead covering of the nave roof was replaced by clay tiles in 1951 and a new steel bell frame was installed in 2000. The clock was installed in 1976 and employed the mechanism which was formerly in the stables at Shavington, Moreton Say, made by Joyce of Whitchurch and dated 1886.

The Church of Holy Trinity, Calverhall, Shropshire is listed at Grade II* for the following principal reasons:

* Architectural quality: the design of two dates and in two complementary styles by the noted Victorian architect William Eden Nesfield forms a powerful design of high quality and shows much attention to detail in its design and execution;

* Intact survival: the building has undergone few additions and alterations and many of the original details of its design are in situ;

* Quality of the original fittings: the careful design of the fittings by the architect, such as organ case, screens, pulpit and font are notable as is the stained glass, designed and made by some of the foremost companies of the period.