A Grade I Listed Building in Charlton Mackrell, Somerset 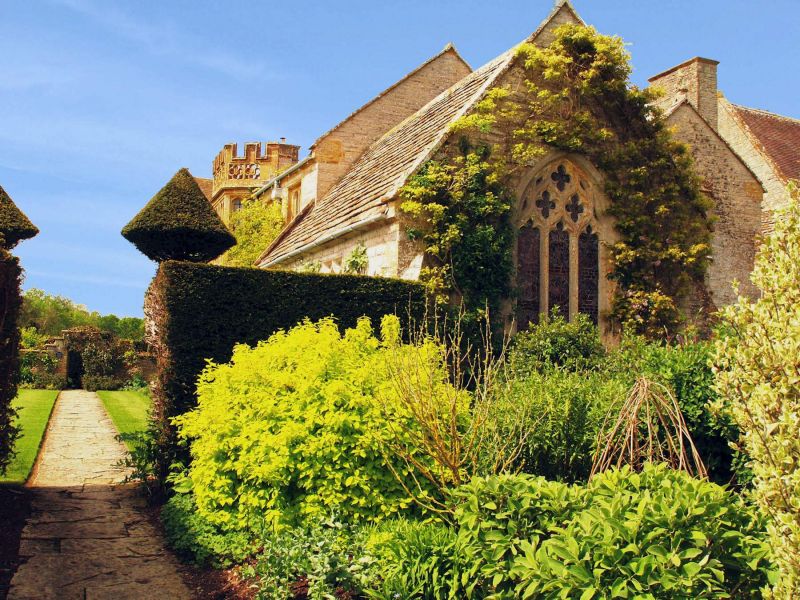 Manor House. C14 origins, mostly C15,C16 and early C20, this last being restoration and extension by C.E Ponting for
Sir Walter Jenner. Local lias stone ashlar with Ham stone dressings; stone slate roofs between coped gables with
finials, some plain clay tile roofs on later work; stone chimney stacks. Two storeys with attic, complex plan around
small central courtyard; the north east and south east ranges representing the earlier work; the north west range being
a largely C18 farmhouse, and the south west range was added after 1907. Entrance on north east elevation, which is of 6
bays: bay 1 is a gable from which the chapel, of C14, projects: this has a 3-light east window with reticulated tracery
in a pointed arch, flanked by angled corner buttresses, with a quatrefoil plaque above; matching 2 light window but
with flat arched head and label on north return, with pointed arched doorway with poppyhead finial to label; bays 2 and
4 are projecting gables; bay 2 has chamfer moulded mullioned window with 4-centre arched heads to-lights, and incised
spandrils, a plain 4-light without label below, and a 1+3+1 angled oriel window above, with stone slate roof; bay 3 has
a single, tall 3-light window; bay-4 is the gabled porch, with moulded shallow cambered arched doorways, and above a
matching 1+3+1-light oriel and gable finial with heraldic figures; bays 5 and 6 are the taller farmhouse building which
has matching mullioned windows to basement, and above casement windows with leaded-panes set under brick-panels and
elliptical brick arches. South east garden elevation of 9 bays:-bay 1 an end gable, with 4-light mullioned window the
post 1907 extension bays 2 and 3 have similar windows with labels to lower windows: bays 4 and 8 the earlier section;
3-light hollow chamfered mullioned windows to bays 4, 5 and 7, with 2 and single light windows bay 8; bay 6 has square
window of 1533, 2 storeys with crenellated parapet over pierced quatrefoil ornament, 2+4+2-lights; between windows of
this bay is featured the arms of John Lyte, builder: bay 9 represents the Chapel, with window to match that on north.
The other outer elevations of lesser import; the courtyard elevations relate generally to outside. The chapel has an
arch-braced-collar truss roof, and has wood fittings of 1631, including the communion rail and a rear screen. The porch
opens into the hall, c1450, also with arched-braced-collar trusses, with double purlins, and cusped curved windbraces,
as roof; cornice of pierced qvatrefoils; a C15 fireplace, but the windows and oriel, of 2 storeys, are C16 additions.
In corner between old ranges, projecting into courtyard is the staircase. In the south east range the parlour,
remodelled in 1533, but with Jacobean-panelling and lonic pilasters, and good chimney piece; above is the great
chamber, with barrel ceiling with geometrical plaster decpration, also of 1533 and a rare survival. The 1907 range said
to incorparate carvings from a Wren City Church, possibly St Benet's, Gracechurch. History and building well
documented. (Victoria County History, Volume III; Hussey, C: Country Life, Vol Cll, 18 July, 25 July and 1 August
1947).