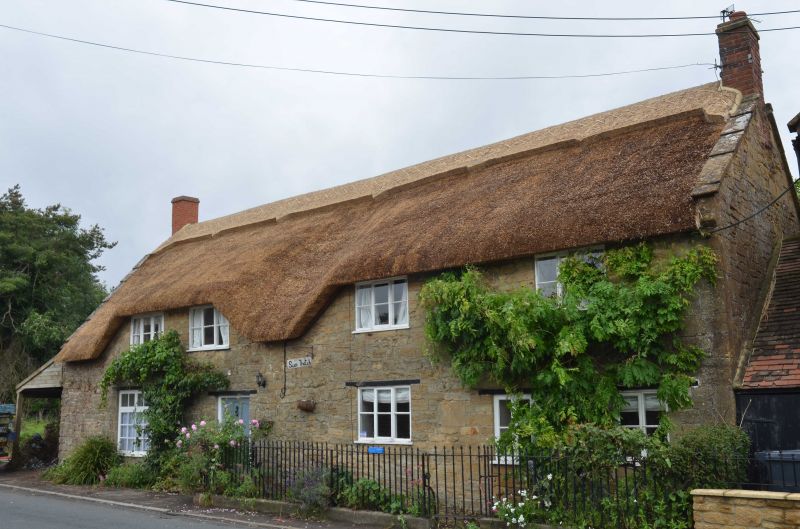 Detached cottage, apparently once divided. Circa 1600 origins, modified. Ham stone rubble; thatched roof between
stepped coped gables; brick end and intermediate chimney stacks. Two storeys, four bays. Horizontal-bar casement
windows, 4-light bay 1 and 3-light bays 3 and 4, all with timber lintels, the window to upper bay 1 set into the
thatch, where the eaves over bays 1 and 2 is set lower: to bay 2 a boarded door in heavy frame, and similar door in
deep recess left of bay 4. Timber leanto against west gable and linking covered wing on east gable. 0utshut to rear.
Interior not seen, but reported is a 3-room cross-passage plan of what was probably a single-storey house originally,
with stair and main fireplace alongside the passage; fireplace has one side timber-framed, with timber-framed smoke
hood above, and the central room has a 6-panel beamed ceiling; oven on northwest corner, probably of later date; roof
trusses of early collar and tie beam type, closed posts. Enclosing a small garden, about 1.2 metres deep, to bays 3 and
4 only a low stone wall with wrought-iron spearpoint railings, having arch-braced urn-cap finials, matching gate
opposite bay 4 door, carved returns to each end, adding to setting of the house, which was formerly the village bakery,
and which later served as a Post 0ffice. (VAG Report, unpublished SR0, January 1979).