Outbuilding to West of Manor Farmhouse 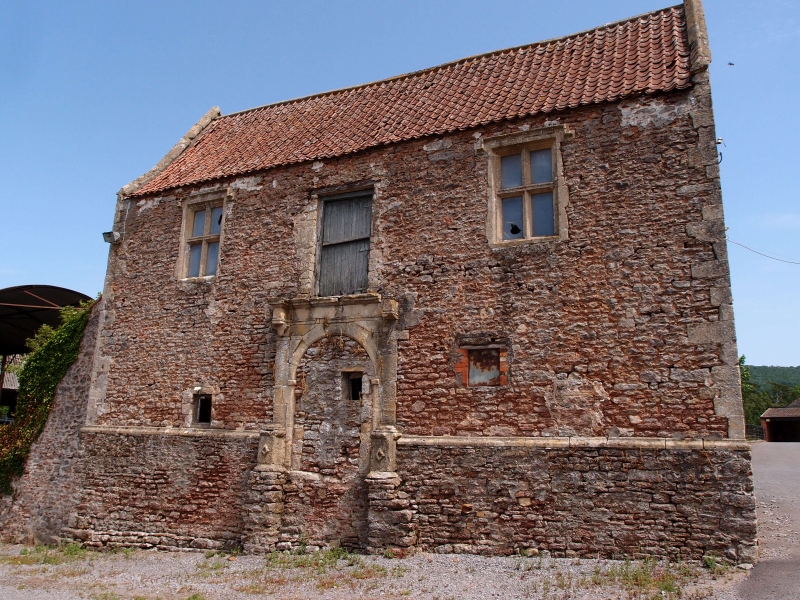 Outbuilding partly enclosing W side of outer court of manor house;
converted into stable and granary in early C19. Late C16 for Rodney
family of the manor house which stood on higher ground to the NE and
was demolished c1800. Uncoursed limestone rubble with mould plinth
band, dressed alternating quoins, remains of lime render and
roughcast; pantile roof, verges with moulded copings. Rectangular
on plan: ground floor has two rooms flanking through passage with
wide E entry blocked by early C19 granary steps. 2 storeys. 2-window
west elevation has central inserted loft door flanked by 2 hollow-
moulded reserve-chamfered 2-light stone-mullioned and transomed
windows with label moulds on first floor. Ground floor has central
blocked classical-style doorway with semi-circular arch and ashlar
surround; emphasized imposts to arch; remains of doorcase with
architrave, frieze with cornice, and bases and pedestals of flanking
columns (columns missing). Two small inserted window openings. East
elevation formerly with 3 similar 3-light stone-mullioned and
transomed windows to first floor: centre window replaced by plank
loft door, but retains label mould; outer windows retain label moulds
and ovolo-moulded surrounds. Granary steps to centre; hood mould
over remains of similar window to right with inserted stable door;
timber lintel over stable door to left inserted into position of
similar former window with fragments of hood mould. Right (N) gable
end has complete 3-light window to first floor.
INTERIOR: central former through-passage has stone doorways with
ovolo-moulded 4-centred architraves set in ogee-moulded surrounds
opening into flanking rooms with stop-chamfered beams; traces of
small fireplace and flue in rear wall of right-hand room. 6-bay
collar-truss roof with chamfered collars, pegged and staggered through
purlins and threaded ridge purlin.
HISTORY: this building clearly enclosed part of the W wall of the
outer court to the manor house, which stood to the NE. The precise
function of this building is uncertain. N Pevsner (The Buildings of
England: North Somerset and Bristol, 1958) suggests a summerhouse.
Although there is no evidence for heating, it is possible that the
upper room was used for meetings of the manorial court, for the
accommodation of servants or guests: Collinson (History and
Antiquities of Somerset, 1791) states that Maurice Rodney (who held
the manor in the late C16) was "one of those good-minded hospitable
gentry who benefited their neighbourhood by residence at their country
house .... and was the first that gave liveries to his men in the
reign of Queen Elizabeth".