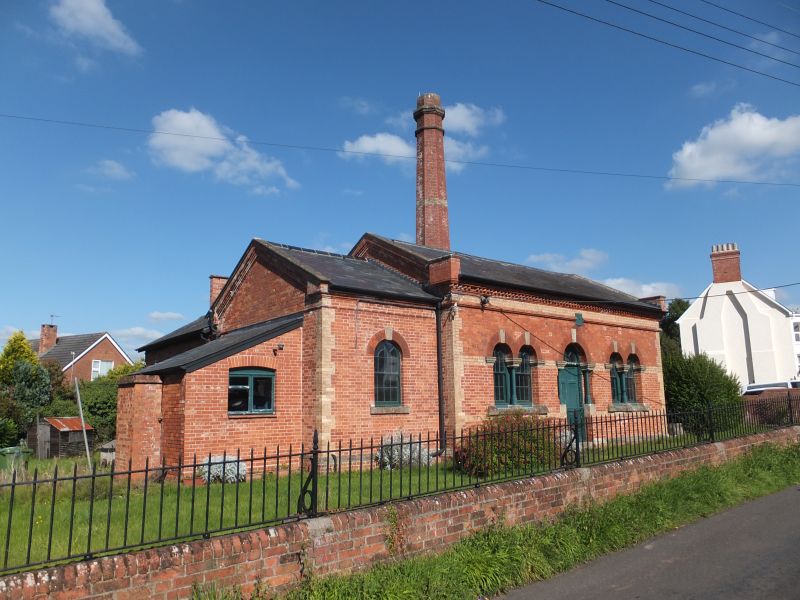 Pumping Station. C1886. Polychrome red brick, gault brick, stone dressings, slate roofs. Single storey, 3 bay range to road with 4 sided bay at east. Lower roofed gable at west with range at right angles. Semi-octagonal chimney is attached at rear. High Victorian Italianate style. Facade has 2 paired red brick arched and keyed window openings with stone sills and imposts, central wooden collonette arched head sashes with glazing bars. 2 leaf 6 panel central door under fanlight, same architrave detail as windows. Stone plinth, gault brick quoins and banding, frieze and dogtooth eaves cornice, coped gables. Five sided bay at east has single keyed round window. Lower bay at east single arched sash with glazing bars. Polygonal stack at rear has banding, 2 strings at full height no coping. The water pumping station at Westford was built in 1885 to provide a piped water supply to the area, replacing 286 wells, most of which were polluted. Gas engines were chosen to power the pumps, both being installed in duplicate, one set operating for ten hours per day, while the other set was held in reserve. The original gas engines were nine horsepower four-stroke Otto type, probably made by Crossley Bros of Manchester. The installation, designed by the consultant engineer, Pritchard, was unusual in using producer gas rather than town gas to operate the engines, the gas being manufactured in an adjacent room from anthracite coal. The Westford gas producer-gas plant was a very early model. One of the gas engines was replaced in 1902 by a larger steam operated engine. Both engines were replaced by an electric motor in 1930. SOURCE: Gledhill, D., The Gas Engines at the Westford Water Pumping Station.