A Grade I Listed Building in Great Bowden, Leicestershire 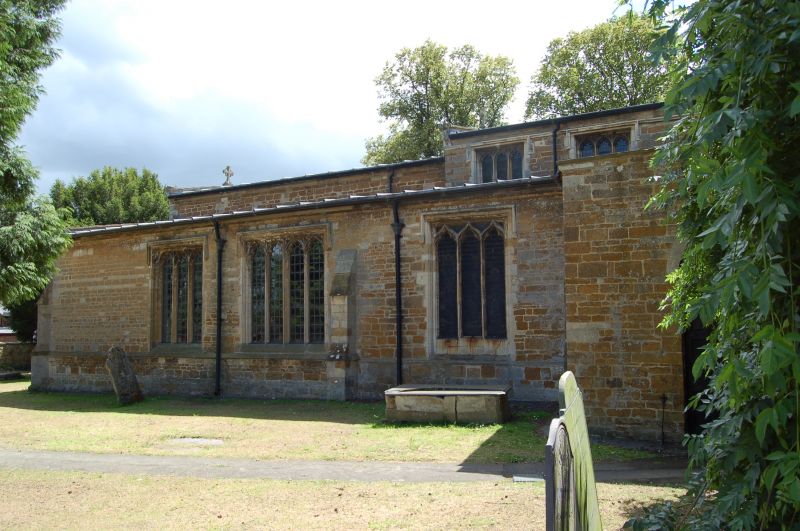 EXTERIOR: The C14 2-stage tower is the earliest element of the exterior, although it was remodelled in the C15. It has diagonal buttresses in the lower stage, embattled parapet and corner pinnacles, and a short parapet spire with lucarnes. The parapet incorporates cross-shaped loops. The west window is 2-light Perpendicular, below a large round clock in a stone surround. The south face has an ogee-headed small window below the string course of the upper stage. The upper stage has 2-light openings with louvres. The remainder of the church is mainly late Perpendicular with square-headed windows. The short 4-bay nave has 3-light clerestorey windows (although only 3 windows on the south side). In the south aisle is a 4-light window and, to the left of the porch, a c1300 2-light geometrical window. The south porch is C18, with keyed round entrance arch, leading to a doorway with continuous moulding. The north aisle has two 3-light windows and a 2-light window, of different sizes and dates. Its west wall has a panel door under a pointed Y-tracery overlight, but the stone surround was originally that of a window. The north porch (1790) has a pointed doorway with keystone, and fielded-panel door below Y-tracery overlight. The chancel has 2 blocked clerestorey windows on the south side (but is blank on the north). Three-bay chancel aisles are the same dimensions as the nave aisles, but a change in the plinth course indicates their different dates. The south aisle has two 3-light windows and a 4-light window, and a boarded door in the east wall. The chancel east window is C19 3-light Decorated, below which there is earlier random-rubble masonry. The north aisle has 3-light and 4-light windows.

INTERIOR: Nave arcades have piers of unusual section, of the type found also at Market Harborough. They have demi-shafts to the arches, and projections on north and south sides with deep hollows. The C14 tower arch is double-chamfered, dying into the imposts. The chancel arch, by contrast, is C19. On its right-hand side is the head of the former rood-loft doorway. In the chancel are 2-bay arcades which, on the north side, have a pier with diamond-set Perpendicular section. On the south side the arcade is C13, with pier of quatrefoil section, double-chamfered arches, and responds with keeled shafts. The piscina and adjacent blocked priest's doorway are also C13, under arches with single chamfer. Roofs are mostly C19, with castellated tie beams to nave and chancel, but the north chancel aisle has a 3-bay roof retaining C16 cambered tie beams, 2 of which have bosses. Walls are plastered. The chancel has a tile floor, the nave a stone-paved floor, with floorboards below the pews.

PRINCIPAL FIXTURES: The main interior features of interest are 2 C15 wall paintings, restored in 1961. A large C15 Doom painting is on the north wall of the north chapel, one of the best surviving examples in Leicestershire. On the south wall of the south chapel the head of a saint is far less-well preserved. Notable post-Reformation features include the organ case of c1700, set on panelling from a late C18 gallery, a repainted Royal Arms of 1778, benefaction and commandment boards. Fragments of post-Reformation texts are on the north wall of the north aisle, where it has now been partitioned off to create a kitchen. The octagonal font was installed in 1887 but its cover (moved to the south chapel at the time of inspection) is C17. Benches have square ends with fluted panels, adapted from late C18 pews. The polygonal pulpit has similar panels and fluting. The wrought-iron chancel screen was added in 1895, and the panelled Gothic reredos in 1932. A monumental brass has an inscription to William Wolstanton (d 1403) but on the reverse side is a C14 head, probably of Flemish origin. This palimpsest is now in a wooden frame in the chancel. In the chancel north wall is a standing neo-classical wall monument to Henry Shuttleworth (d 1800) by J. Wing. There are several other C18 and C19 wall tablets. The east window is by Heaton, Butler and Bayne (1891) showing the Passion and Resurrection. One window in the south aisle is by Hardman (1907).

HISTORY: The building is C13 in origin, evidence for which is the south chancel arcade and piscina and blocked priest's doorway. The nave had at least a south aisle by c1300, evidence for which is one surviving window. The tower was added in the C14, by which time the present plan of the church was probably established. Nave and aisles were rebuilt and heightened in the C15. The south porch was built in the C18, and the north porch in 1790, along with a gallery and new box pews. The church was restored at a cost of £2229 in 1886-87 by W. Talbot Brown and Fisher, architects of Wellingborough, and the contractor was W. and J.H. Martin of Market Harborough. Windows were restored, a new chancel arch was built, new tracery was designed for the east window, and roofs were rebuilt. The gallery was removed, and box pews were cut down to make the present benches.

REASONS FOR DESIGNATION
The Church of St Peter and St Paul, Great Bowden, is designated at Grade I for the following principal reasons:
* It is a substantially complete medieval church of the C13-C15, especially notable for its C13 and C15 arcades and C14 tower, well-restored in the C19.
* It has a late-medieval Doom painting, a type universal in pre-Reformation churches but which is now an extremely rare survival.
* It has other features of special interest, including the organ case of c1700, C17 font cover, medieval brass, and another fragment of medieval wall painting.