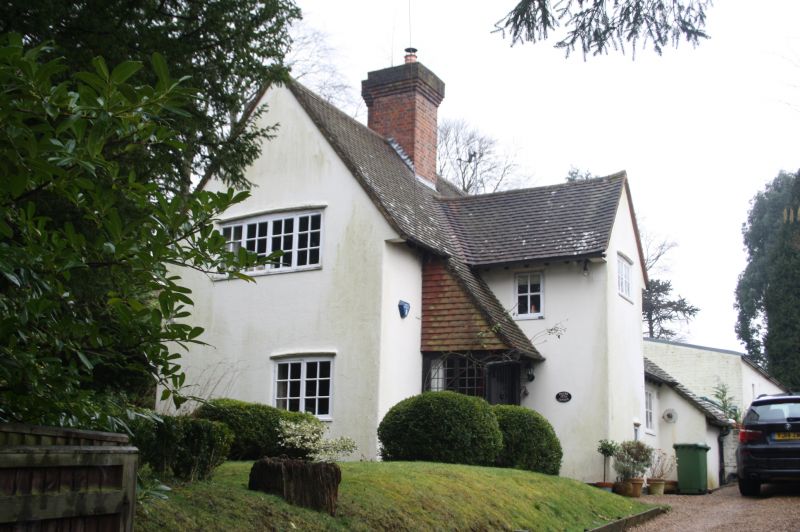 Lodge, later house. Designed in 1937 by the firm of Baillie Scott and Beresford for E A Mitchell Esq. It was the lodge to a house called Tylers in Kippington Road by the same firm of architects. Later C20 extensions to the rear are not of special interest. A late example of the Arts and Crafts style. Rendered brickwork with tiled roof and central brick chimneystack. Asymmetrical building of two storeys with mainly wooden casements of six-panes but mullioned window with leaded lights to porch.
EXTERIOR: East elevation facing the street has a central gable with plain kneelers with a four-light casement with cambered head to first floor and a two-light casement to right hand side of ground floor. Entrance in north front facing drive to Tylers. This has a catslide roof interrupted in the centre by a narrow gabled stair turret with kneelers with a first floor casement and decorative metal footscaper. To left is a penticed porch with tiled gable facing east, partially chamfered door surround, plank door with iron hinges and two-light wooden mullioned window with leaded lights facing east. Later C20 flat hood. To the right of the stair turret is a dormer window lighting the landing and a ground floor window lighting the service end. The south elevation has a right side projecting gable with four-light window to first floor and three-light window and doorcase with plank door below and right side three-light window to ground floor. The west elevation has a gable with two-light casement to the first floor but the ground floor has been obscured by a large later C20 brick flat roofed extension.
INTERIOR: The living room has a large open fireplace with brick surround and wooden bressumer with shelf and central beam. The parlour has a similar beam and angled fireplace. There is a dogleg half-winder staircase with wooden supports and plastered infill to balustrading.