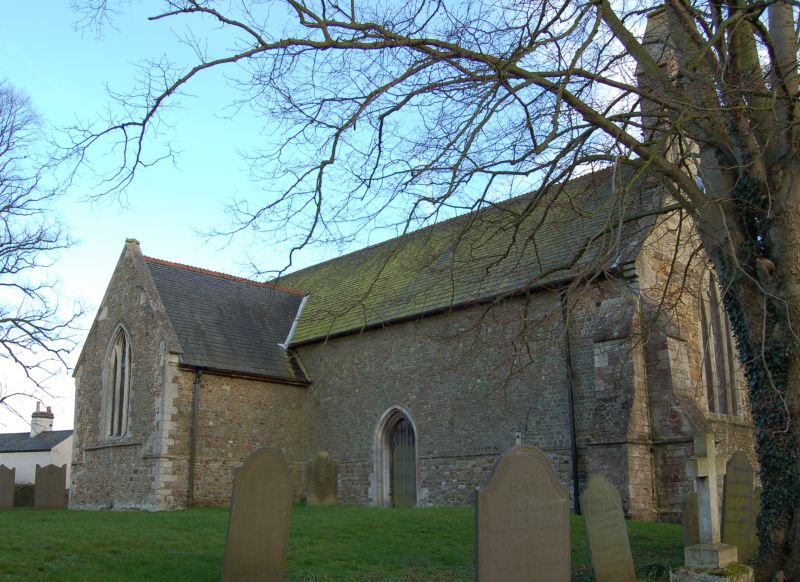 Parish Church. Late C13, restored by J.L. Pearson in 1882. Coursed cobble
stone with limestone dressing and Swithland slate roofs. Western bell cote,
aisleless nave with transepts and chancel. West bellcote above buttressed
west end has paired openings with quatrefoil above. Restored by Pearson, but
the gable apex is filled with coursed and squared limestone which is dated
1716. West window of 3 lancets pierced in ashlar surround, is by Pearson.
Sill course below continues throughout the building. South porch largely
medieval, although the coped gable was re-built and the outer arch restored
in 1882, but the responds of the arch appear to be original. Inner door has
double hollow chamfered archway: the hood mould is in Pearson's style. Square
porch windows with mutilated corbel heads to hood mould. Coped transept gable
also restored and given a triple lancet window. Similar window in chancel,
but the priests door and south east window are medieval, the latter is a C15
insertion, a square headed window with 3 ogivally arched lights. East window
is also of 3 lancet lights, set in ashlar surround, and pierced by trefoils
in the spandrels. North elevation blank but for 3-light transept window and
north doorway, a Victorian addition. Inside, wide and spacious nave, bare cobble
stone walls with moulded ashlar cornice. Evidence for former piscina alongside
tall south doorway, which has corbel heads to hood mould. Double chamfered,
transept arches rise from cylindrical shafts, the outer chamfer continues to
floor level where there is an elaborate chamfer stop. In the south transept, is
a 2-centred arched piscina beneath the window, richly moulded, and on the west
wall a length of C17 oak panelling said to have come from the Manor House at
Knaptoft. Piscina in west wall of north transept has trefoiled arch and hood
mould with corbel heads. There is no chancel arch, just a small change in level
and a wood screen made by J.L. Pearson from old oak, simply worked in a medieval
craft tradition with 6 narrow trefoiled arches and a wider central arch above
which is a simple cross. 2 wall memorials in the chancel: on the north wall
to the Reverend James Tindall, d1852, a Gothick tablet with inscription in
ogee arch flanked and capped by pinnacles with fleurons. On the south wall
there is a painted wood tablet in a late medieval style to the memory of Henry
Green, the Rector responsible for Pearson's restoration work. Unusual late
C19 painted wood reredos with 4 panels, in reds and blues with floral and
heart-like emblems and birds among branches. Font is late C13: octagonal with
trefoiled panels, mounted on a Victorian base. Stained glass in chancel east
and south east windows is from the same studio, but only the south east window
is dated, 1891. It depicts scenes from the life of Mary while in the east
window are scenes from the life of Christ: blues and yellows predominate.
Fine roof construction throughout by J.L. Pearson. 4 principal trusses of
crown post construction are braced laterally and longitudinally with boarding
between the many secondary rafters. A dormer effect is produced where the
transept roofs join: they have secondary rafters with struts and ties. Over
the altar, the 2 eastern most bays are coved, with ribs, forming a type of
wagon roof, with herringbone short planking.