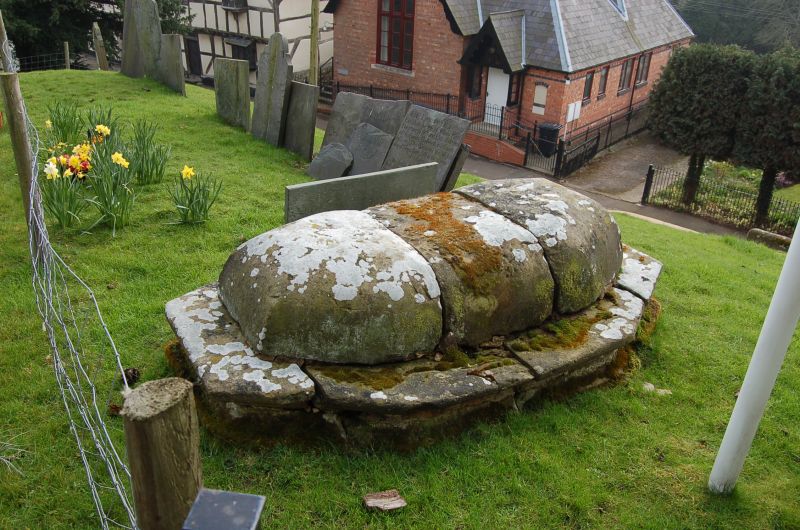 Parish Church. Very little of a medieval building survives, since the church
was extensively restored by Ordish c1880. The tower, however, was built in
1789. Limestone ashlar to tower, the rest of random granite rubble with
limestone dressings. Two stage tower is an odd mixture of classical and
gothic allusion, with two-centred arched windows to ground floor with wood
Y-tracery and a similar window in the second stage, but with a Gibbs
surround. The second stage has stepped pedestal and angle pilasters and is
divided by a sill band, above which is an oculus, and it is surmounted by a
small octagonal stump with oculi. The west facade is the show piece with C18
wood panelled door in architrave with splayed voussoirs and stressed
keystone. Above it is an inscription plate and a quatrefoil recess, and this
is all contained in an ogival arch, itself set beneath a pediment. The
inscription records that "this steeple was re-built at the expense of the
landowners of this lordship A.D. 1789". The west walls of the nave reveal
medieval masonary overlaid by C18 ashlar work which contains elegant niches.
The remains of the original wall form a short buttress at the angle which is
surmounted by a winged dragon gargoyle. The rest is Victorian with plinths,
buttresses and tracery in an early Decorated style with grouped lancets.
South door with continuous moulding within porch. Steeply pitched roofs with
plain tiles. East wall also of medieval fabric: cobblestones and a dragon
gargoyle. The window, however, is an insertion as is the small quatrefoil in
the gable apex. Blocked door to north and a solitary corbel with angry
beast's head. Inside, a single space with C18 square headed doorway and
blocked window above to tower. Other features are all Victorian. Scissor
braced rafter roof. Wood chancel screen however is C15 with square panels
with foiled decoration and central ogival arch with cusping. C14 sedilia in
chancel with cylindrical shaft and trefoiled head: The moulding is heavy and
inaccurately set out. Piscina in similar style. Stained glass in chancel
east window of 1885, in a painterly style. Glass also in north aisle of
1856-7 depicting the Resurrection and a Miracle story, these in a more
medieval manner. Victorian fittings include benches, heavy stone pulpit and
font.