A Grade I Listed Building in Peatling Magna, Leicestershire 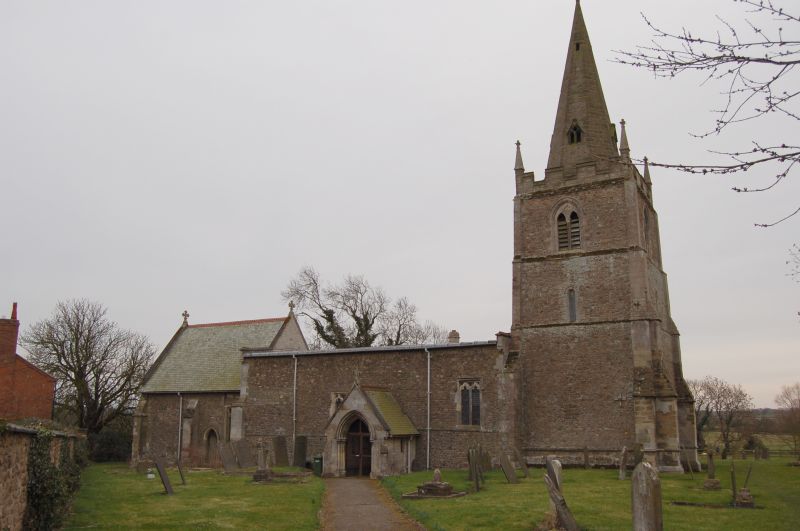 PEATLING MAGNA
ARNESBY LANE (South Side)
Church of All Saints

GV
I
Parish Church. Dateable features are largely C13, and fabric seems largely a
single build though with several examples of Perpendicular work, and
restoration work of 1906, conservative in character. Small rubble or cobble
construction with ashlar dressings. Leaded nave roof, Welsh slate to
chancel. West tower and spire, nave and chancel. Massive 3 stage tower on
ashlar plinth, with angle buttresses. The stages are each recessed
slightly. Lancet window to west, and in first stage paired bell chamber
lights with central shaft and plate tracery. Corbel table above. Embattled
parapet with thin angle pinnacles. Recessed spires with two tiers of
lucarnes. South nave wall has renewed plate tracery light to south west,
simple chamfered arched doorway and two Early English windows, the
intersecting tracery forming two and three lights, with hood moulds.
Continuous sill band. Central buttress. Steep pitch of former nave roof
visible in outline in east wall of tower. Buttressed chancel has plate
tracery to south-west window and a Perpendicular window of 3 principal lights
with smaller upper trefoiled lights in chamfered segmental headed arch. East
wall seems to be a rebuild and is mostly window:- 5 lancets, c.1906. Steeply
arched and chamfered Priest's door to north and Perpendicular window of 2
principal lights with smaller upper lights. North nave windows are also
Perpendicular of 2 and 3 lights, set beneath a square headed stilted hood
mould. North porch added c.1906, the doorway has exaggerated ogivally arched
head and chamfered jambs. The door itself may be C18 or Cl9 and consists of
paired panelled doors. Inside, the restoration involved removal of all
plasterwork in the "scrape" tradition. Continuous triple chamfer to tower
arch: the large space beneath the tower houses substantial fragments of a C14
screen with moulded ribs and a dentilled rail above the lower panels, some of
which have an applied tracery decoration. C16 balusters added. More
panelling of C17 with turned balusters on west and north walls. Nave roof is
C15; a fine example of local woodcarving tradition. Shallow pitch with
moulded tie-beams, purlins and ridge piece.. Each tie has central bosses
carved exuberantly with grinning heads, heavy foliage etc. Screen wall to
chancel and chancel arch are Victorian so is the boarded wagon roof of the
chancel. Tomb recess in north wall with wide shallow trefoiled arch deeply
moulded, with dogtooth hood mould. It is capped by a coat of arms. In
front of it, but unrelated, a tomb chest of 1614. Alabaster, in memory of
William Jervis and his two wives, Anne and Frances. The 3 figures are
represented as incised effigies on the slab, which is heavily worked all
over. The 5 children of Anne and William are represented on the base; they
are carved as frontal figures, their proportions almost grotesquely distorted,
but in very detailed rendering of costume etc. Behind this, to the east, is
another tomb chest, from the same school, this is dated 1597 in memory of
William and Catherine Jervis and they again appear richly detailed in
continuous patterning incised on the slab. William lived to be 94, and
fathered a great many children who are again represented as frontal figures on
two sides of the base. Facing west, are 4 shrouded children flanking a male
figure (perhaps the father or an elder son) and on the south side 4 boys, a
man, 3 girls, a woman and 2 shrouded figures. Again the proportions are
distorted but no detail is spared. To the south a wall tomb only 4 years
later than the latest of these but in a vastly different style. 2 ample
figures kneel in a predella with an inscription recording their numerous
virtues. They are William Jervis, d.1618 whom it commemorates, and Elizabeth
his wife who commissioned it. Fragments of medieval encaustic tiles in the
chancel and of C14 stained glass in a north window; 2 angels play a harp and
a trumpet. Stained glass to south nave window of 1907. Pulpit is of 1685,
handsomely panelled with sounding board. Series of early C17 benches (one is
dated 1604). The bench ends have concave triangular tops with finials and
round arched recessed panels with geometric ornamentation reminiscent of
strapwork. One is also carved with linen-fold on its inner face. 2 earlier
and rougher benches survive at the west of the church. C13 font modified C19
by the addition of marble shafts to support massive undecorated basin.