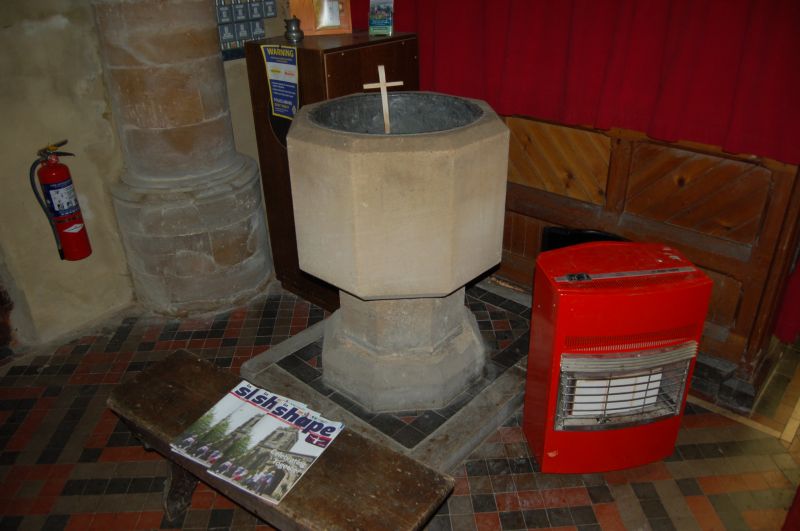 Small Parish Church. Largely C17, restored by Goddard of Leicester in 1869.
Coursed ironstone rubble with Welsh slate roof, stone tiles to chancel roof.
Nave with western bellcote, clerestory and chancel. West wall and bellcote,
and south porch by Goddard. The 3 south windows are small y-traceried lancets
the spandrel of the central one filled with a floral motif in stone. Clerestory
lights each consists of paired trefoils, above a continuous sill band. Tiny
memorial stone to William Brudenall, d1636 towards the east. Fabric of chancel
south wall apparently re-built above a few feet, but probably in the C13 or
C14: the 21ight window appears to be medieval. East wall however probably
entirely Victorian: certainly its 3-light window is by Goddard in the Decorated
style. North wall of chancel probably C13: poorly coursed rubble with moulded
sill course, 3 paired lancet windows, with a narrow 2 centred arched priests
doorway. North wall of nave has 3-light Victorian windows in the Perpendicular
style flanking medieval lancet. Ashlar bands as sill courses.

Interior reveals blocked early C13 arcade of 4 bays concealed in south wall:
tall bases to cylindrical shafts and abaci, and outer 2-chamfered arches with
hoodmoulds. Eastern respond has stiff-leaf decoration as capital. Victorian
curved principle roof with pierced trefoils at the apex. Later C13 chancel
arch with clustered shafts. Chancel windows apparently late C13: Paired lancets
in shafted recesses, those to the north more deeply recessed, and with splayed
sills. Memorials to Brudenall family in chancel include tomb of Edmund d1590
the inscription is on a wall tablet and below Edmund lies as a marble effigy
on a tomb chest. The sides of this are decorated with pilasters and strapwork,
and portray his wife and three of his offsprings in high relief. Along side
the recumbent effigy is a tiny one of his fourth child, swathed, and lying
on its own miniature tomb chest or altar table. Early C17 floor tablets, and
on the south wall the tomb of Dorothy Brudenall d1653 and Thomas, d1661. A
small aedicule ornamented with shields surrounds a double inscription plate.
Also on the south wall the memorial to Thomas Brudenall dl707: an oval wall
tablet is capped by his shield and emblem and superimposed on low relief military
regalia. Thomas Brudenall was in the service of William of Orange, and fought
at the Battle of the Boyne and in Spain. He died in Gibraltar and was buried
there "betwixt 2 guns". Stained glass in chancel east window of 1869 is by
Drury of Warwick. Plain octagonal font. Victorian fittings include fine wood
pulpit which incorporates a small eagle lectern. Victorian timbered chancel
roof with steep trusses with short king posts and crossed wind braces between
the purlins.